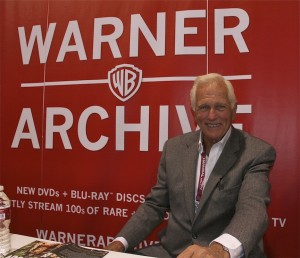 In the late 1960s and early 70s, few actors stood as tall in their heroic roles as Ron Ely.

From television’s Tarzan to the big screen’s Doc Savage: The Man of Bronze, Ely’s 6-foot-4-inch muscular frame made the scenery cower when he stepped before a camera.

The 74-year-old actor stands just as tall today, commanding audiences with his tales of those golden days of pulp fiction on film. Warner Archive Collection has brought Ely’s best-loved roles back into the
spotlight, making the classic titles available on DVD and through its new live-streaming service, Warner Archive Instant.

Premiering on NBC in 1966, Edgar Rice Burroughs’ immortal creation, Tarzan, took to the nation’s TV screens for the first time. Still in the capable hands of producer Sy Weintraub, the TV Tarzan (the
aforementioned Mr. Ely) continued the more recent (and more authentic) interpretation of Lord Greystoke as a sophisticated, articulate jungle adventurer as seen in the Tarzan films of Gordon Scott, Jock Mahoney and Mike Henry. Also carried over from the big screen was young actor Manuel Padilla (Tarzan and the Valley of Gold, Tarzan and the Great River), now playing the jungle lord’s kid sidekick alongside Cheetah, the simian one. 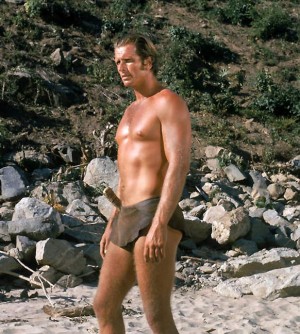 Based on the first of Kenneth Robeson’s 181 adventure packed books, Doc Savage: The Man of Bronze hit the screen with all its gee-whiz, gung-ho spirit intact. And its bold protagonist, who along with having a herculean body is also a surgeon, linguist and inventor, remains determined to do right to all and wrong to no one. Ely plays the strapping Savage in this high-camp, big-heroics tale of his trek into the Valley of the Vanished to confront the power-hungry Captain Seas (Paul Wexler). And behind the camera are pros who know how to get the most out of this entertainment bronze mine: veteran fantasy film producer George Pal (The War of the Worlds, The Time Machine) and director Michael Anderson (Around the World in 80 Days, Logan’s Run).

Once reluctant to embrace his cult hero status, Ely has joined Warner Archive Collection at two major events over the past six months – at the Paley Center for Media in Los Angeles, and WonderCon in Anaheim – to celebrate those cherished productions of 40-plus years ago.

In addition to Ely’s starring roles, Warner Archive Collection is now offering a number of classic films and television series representative of the pulp heroes of yesteryear. Included amongst those productions are the Tarzan Collections (the most recent featuring films of the 1960s: Tarzan Goes to India, Tarzan’s Three Challenges, Tarzan and The Valley of Gold, Tarzan and the Great River,
Tarzan and the Jungle Boy) and Bomba The Jungle Boy, Volume One. 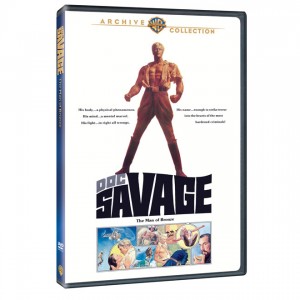 Bomba release includes six of these rare films, which were released from 1949-51. Monogram pictures made an inspired choice when it opted to adapt the Stratemeyer Syndicate’s (Nancy Drew, the Hardy Boys and Tom Swift) series of books with Bomba the Jungle Boy and paired it up with Tarzan’s own now grown “Boy,” Johnny Sheffield. Under the leadership of newbie producer Walter Mirisch, the series skillfully blends stock photography, imaginative scripts and teen romance to deliver A-list fun on a B-list budget (and proving to be a smash hit for the studio). Fellow former child-star Peggy Ann Garner
provides for Bomba’s jungle distraction in the inaugural installment, while other guests of note to be found in the first six films in the series include Allene Roberts, Donald Woods, Paul Guilfoyle, Sue
England, Woody Strode, and Donna Martell. Silent-to-TV-era journeyman Ford Beebe directs all six.

But back to Mr. Ely, who took some time in conjunction with his appearance at WonderCon over Easter weekend to answer a few questions. Heed the words of Tarzan …

QUESTION: What are you impressions of pulp heroes?

RON ELY: When I was a kid, we had radio, we had Saturday morning serials, and we had comic books. It wasn’t like today – we had a limited array of things, but those things especially appealed to kids. I loved comic books, and I read a lot of them. Archie, Superman, Captain Marvel – those types.

Part and parcel of being a kid back then was to latch onto larger than life heroes. It wasn’t until we became adults that our hero image became more adult and humanized with flaws. Back then, they had no flaws – our heroes were the biggest, the baddest, and the most honorable. All those principles set in motion everything that followed suit for me.
Doc Savage was one of the most successful series of books – the character was one of the triumvirate of great action heroes, along with Tarzan and Superman. Those three really set the standard for pulp
heroes. It’s interesting that Warner Archive has all three of them – they’re like a superhero factory. I can’t think of anybody that can compare.

QUESTION: As a kid, who were your heroes?

ELY: I grew up in Amarillo, Texas, so my heroes were cut from the same cloth that I saw all around me. Cowboys like John Wayne and Bob Mitchum. One of the joys of getting into this business was that I
actually got to know some of my heroes. Those western, heroic characters occupied my interests in film more than any others. I loved the comic book and pulp heroes, but for me, you couldn’t beat John
Wayne.

QUESTION: What does it mean to you to be a hero?

ELY: It’s sort of a funny thing being called a hero, because it’s not something I wanted to do. But it just kept coming for me. I don’t really understand why, but I appreciate it because I think it might
have grown out of my sticking to the solid, basic principles I learned growing up. Those important characteristics tend to exist more in the superhero characters than other flawed adult characters. I always enjoyed playing the flawless characters because, whereas some folks find them corny, I appreciate the morals, the lessons, and all those things that superheroes are designed to be and represent.

QUESTION: What has prompted you to come out of your shell a bit and embrace the fans and the fan conventions?

ELY: I used to hate being around the fans – I avoided it like the plague. I enjoyed the anonymity. That’s why I pretty well dropped off the face of the Earth for quite a long time. But getting back out into the public again has been one of the most rewarding experiences that I can imagine. Those fans are diehard. They hang on, they don’t let go. They believe in Doc and Tarzan – they believe in them in a way that makes you want to know more about them.

It was surprising to me to find out the fans are still there, to discover the fan base is so enormous. It surprised to see younger people in that mix who weren’t around when I made Tarzan. It’s a kick for me. I enjoy seeing those people and hearing what they have to say. They embrace these characters for the right reasons. It’s not a character like in Die Hard – characters like Doc Savage, Tarzan and Superman are more pure superheroes. There’s a special group of characters, and a special group of people that remain true to those characters as fans.