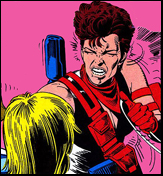 While I was out of the country, there was apparently a media kerfuffle about the introduction of a transgender character in the pages of Gail Simone’s Batgirl. There were stories in the LGBT press, in USA Today, and on comics sites (here) (and here too).

A lot of these stories said that this was the first transgender character to appear in a mainstream comic, and I don’t think that’s true. There was a transgendered character in Mike Barr and Brian Bolland’s Camelot 3000, published by DC. The lead in Milestone’s Deathwish from the 1990s was transgendered, and that book was distributed by DC, which to my mind makes it mainstream. It was also quite a beautiful mini-series, and I really can’t recommend it highly enough. There were also several transgender characters in various Vertigo series.

However, I’ll accept that these were seen by fewer people than a Batbook.

The reaction by the audience for these books has, for the most part, been better than I predicted. Relatively few people are calling it a “publicity stunt,” and those who do seem to not understand what a publicity stunt actually is. For example, I seriously doubt that DC’s publicist went to Gail Simone and asked her to introduce a transgendered character.

When I was DC’s publicist, I would have been fired for trying to influence a storyline. The closest I came was suggesting to Neil Gaiman that he might enjoy the chance to do a public service comic about HIV. And even then, there were lots and lots of corporate hoops through which I had to jump, not because of any political controversy but because of a corporate culture that respected the separation of editorial and marketing.

And then there are the people who get defensive. For example, in the second article to which I linked above, there is this in the comments thread:

• I think all DC characters should become lesbians,gay and transgendered.

• Because the majority of DC’s audience is.

There are so many things wrong with this. For one thing, I don’t think Marvel’s audience is significantly larger than DC’s, and, in fact, I suspect there is a tremendous amount of overlap. For another, there are transgender characters on television shows like Glee, which have a larger audience than DC and Marvel combined. And, finally, it is disturbing that in 2013, this moron still thinks it is an insult to suggest that DC’s audience is queer.

Whenever a character is introduced who is not a straight, white Christian male, there is inevitably someone who complains that this is done because the creative team is being “PC.” It is impossible for these critics to imagine that creators could find diversity interesting in and of itself, or want to reflect the world in which they live. Perhaps the creators want to challenge themselves to imagine different ways of being human. I never hear anyone complain that someone who writes stories about straight, white Christian people is pushing a political agenda.

Because I’m still jet-lagged, I haven’t read Batgirl #19 yet, as I write this. I plan to get it this week, when I go to Forbidden Planet for my regular fix.

I hope it’s not sold out.