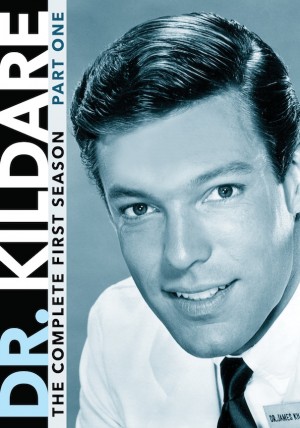 We here at ComicMix celebrate all manner of pop culture from today’s obvious hits to the arcane wonders of yesteryear. every now and then we get a notice about something that seems just outside our realm of interest but there’s a thing or two that grabs us. Something like an unaired pilot to the legendary Dr. Kildare series is one of those things. Not only that, but the series gave us Richard Chamberlain as a star (long before he was resurrected for Leverage). The show not only boasted an impressive guest cast, as noted below but it featured some of the best writers working in television including a pre-Star Trek Gene Roddenberry. So, here’s the press release for those who remember and remain interested:

Warner Archive Collection continues to unveil some of the finest series in television history with its release this week of DR. KILDARE: THE FIRST COMPLETE SEASON. The newly remastered DVD premiere includes a “lost” episode – “The Eleventh Hour,” the original, never-aired pilot for the Wendell Corey drama.

Young Richard Chamberlain and veteran actor Raymond Massey don the surgical scrubs – first made famous in the Dr. Kildare films of the 1930s and ‘40s by the team of Lew Ayres and Lionel Barrymore – for the equally successful TV incarnation in the 1960s. Chamberlain’s star ascended quickly, as the show swept him from being a relative unknown to full-on teen idol status (in a show pointed squarely at adults, no less).

William Shatner is featured in this clip from DR. KILDARE: THE FIRST COMPLETE SEASON:

Beyond the impressive guest cast, the true star for TV fans is the “lost” episode. “The Eleventh Hour,” the never-aired pilot, teams Dr. Theodore Bassett with Drs. Gillespie and Kildare to get to the bottom of what the devil is wrong with Ann Costigan (Vera Miles).

All episodes have been newly remastered especially for this DVD premiere release. Initial quantities of this release will be traditionally replicated (pressed) in anticipation of high consumer demand.