REVIEW: The Way Way Back 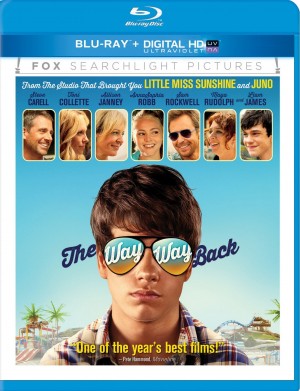 In my other life, I teach 9th grade and the theme for the year is Coming of Age. It has become a major inspiration for movies, television, songs, and tons of books for the last century or two. As a result, it takes a lot to gain attention and have something fresh to say. The Way Way Back odes that by examining three different stages of coming of age, each a type you’ve seen before, but melded nicely into a satisfying blend.

The movie, out now from 20th Century Home Entertainment, tells the story of Duncan (Liam James), who is forced to accompany his divorced Mom (Toni Collette) on a summer away with her boyfriend, the quietly cruel and controlling Trent (Steve Carell), and his daughter Steph (Zoe Levin). He’d rather be with dad, who is busy settling into a San Diego life with his new girlfriend. Instead, he’s plunged into a community with long-term ties so h feels even more of an outsider and unwanted member.

From his point of view, the pot smoking, alcoholic-fueled adults are little better than the swarm of teenaged girls who have their own clique and social conventions that keeps him at arm’s length.

Instead, there appear to be only two people willing to tolerate his brooding adolescent self: the cute girl next door Susanna (AnnaSophia Robb) and Owen (Sam Rockwell), owner of the island’s superfluous water park. Owen refuses to grow up, shirking his responsibilities in order to coax Duncan out of his angst shell. There are few adults who act responsibly in this tale although Owen is fortunate to have one of them (Maya Rudolph), who has patiently invested in him, much as he invests in Duncan.

The remainder of those over 30 are a sorry lot with smarmy Trent badly concealing his ongoing affair with Kip’s (Rob Corddry) wife Joan (Amanda Peet). Boozy Betty (Alison Janney) is as cluelessly nasty to her own son Peter (River Alexander) as Trent is Duncan, emphasizing he is far from unique.

Co-writers and co-directors Nat Faxon and Jim Rash bring a lot of heart to the story, even if the performances are too broad at times so become distracting. Additionally, the large cast is underserved with sketchy characterization, each playing a type rather than a person. Still, this is an entertaining exploit worth a look.

The high definition transfer is absolutely fine and the Blu-ray comes with a mere handful of features including three deleted scenes (3:02) and a perfunctory Behind the Scenes with the Hilarious Cast and Filmmakers (31:19).