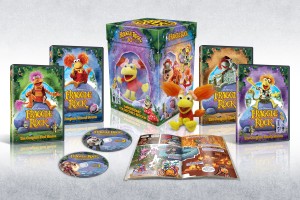 UNIVERSAL CITY, CA – Celebrate 30 years of dancing your cares away with the Fraggle Rock gang when Jim Henson’s imaginative series commemorates three decades of music, magic and mayhem with the Fraggle Rock: 30th Anniversary Collection, singing its way to DVD May 14 from The Jim Henson Company and Gaiam Vivendi Entertainment.  Headlined by the iconic characters, Gobo, Red, Boober, Wembly, Mokey and the adventurous Travelling Matt, the groundbreaking series from the legendary Jim Henson originally aired from 1983 to 1987, and continues to capture the imaginations of adults and children of all ages today through recurring airings on The Hub. Teaching valuable lessons on tolerance, spirituality, personal identity, environment and social conflict, the 30th anniversary collection will give parents who grew up watching the innovative television classic the chance to share the wonderful world of Fraggle Rock with their children. 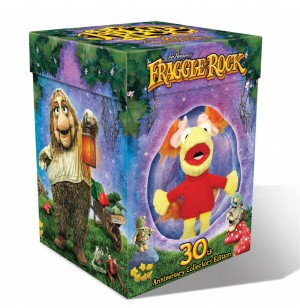 The colorful and exciting world of Fraggle Rock is an underground universe behind the baseboard of Inventor Doc’s workshop, populated by upbeat Fraggles, the industrious Doozers and the giant Gorgs.  Through the different communities, the pioneering children’s series encourages tolerance, diversity, empathy and peace by modeling how these characters learn toto live in peace by working together to achieve common goals.

The Fraggle Rock: 30th Anniversary Collection DVD, including all four seasons of the celebrated series, along with behind the scenes interviews recently discovered in the archives of The Jim Henson Company, a collectible Red plush keychain, and an all new exclusive Fraggle Rock graphic novel featuring a parent-friendly activity guide, will be available for the suggested retail price of $129.99.   Additionally, the new collection Fraggle Rock: Meet The Fraggles, featuring the pilot, as well as five acclaimed episodes highlighting each of the beloved main characters, available for the suggested retail price of $14.93 will be available to introduce Jim Henson’s world-renowned series to a new generation of fans.

Synopsis: Dance your cares away as you return to the magic of Fraggle Rock in this 30th Anniversary Collectors Set!  Inventor Doc and his dog Sprocket spend their days in a workshop..and a hole in the baseboard of that workshop leads to the underground universe populated by the upbeat Fraggles, the industrious Doozers and the giant Gorgs.  Get ready for music, magic and mayhem from the iconic Jim Henson in this beloved series that continues to capture the imaginations of adults and children alike.