FORTIER TAKES ON THE DESTINY OF FU MANCHU! 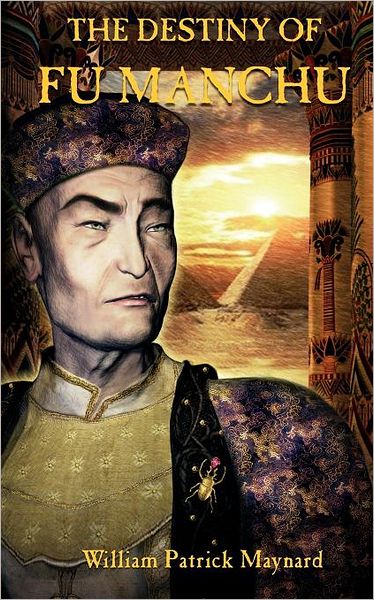 When William P. Maynard wrote The Terror of Fu Manchu, it justifiably received an overwhelming positive reception from the pulp community.  Not only had Sax Rohmer’s classic character been resurrected after decades, but by a wonderfully talented writer able to tell the story in Rohmer’s same, unique literary voice.  Reading that book one could easily imagine it having been penned by Rohmer, it is that good.  And before all the hoopla had died down, it would go on to receive many acolytes and even a Pulp Factory Award nomination for Best Novel of 2010.  This success did not go unnoticed by both the publisher and the licensors.  They wisely concluded that Fu Manchu fans would want more from this skilled writer and were only too happy to sign Maynard to write a sequel.
The Destiny of Fu Manchu is that rare follow up book that is better than the first.  Which is no small feat by any means.  Taking a different tack, Maynard opts to tell this new thriller through the eyes of British Archeologist, Prof. Michael Knox rather than those of Dr. Petrie, the original series’ best known raconteur.  In doing so, he offers the readers a marvelously new perception of these classic figures from both sides of this on-going saga.  Knox, unlike Petrie, in not a selfless, courageous hero but rather a shallow, womanizing opportunist who, upon finding himself entangled with the deadly forces of the Si Fan, immediately flees with no other plan than to save his own skin.
For whatever reasons, Fu Manchu and his enemies are after a hidden Egyptian power buried under one of the pyramids Knox and his colleagues are excavating.  When his associate is brutally murdered by oriental assassins, Knox disguises himself and flees, hoping to escape whatever dangers have befallen him.  Instead he is found, seduced and hypnotized by Fah lo Suee, the daughter of Fu Manchu.  She is the most alluring Femme Fatale ever created in pulp fiction.  At the last possible moment, Knox is rescued by the determined Sir Nayland Smith of British Intelligence; Fu Manchu’s arch rival. From that point onward, the narrative becomes a world spanning adventure going next to the jungles of Abyssinia and London, then on to Munich before making a complete circuit and ending back in Egypt.
Maynard cleverly weaves in a diabolical plot that has Knox and Smith involved with Prime Minister Neville Chamberlain’s Munich meeting with Chancellor Adolf Hitler in an ill fated attempt to forestall a second world war.  His portrayal of Hitler and his bullying manipulation of the western world leaders is deft and insightful blurring the line between history and fiction to tell a fantastic, mesmerizing tale.
As ever, Maynard’s true genius is his comprehending Fu Manchu’s complicated character and motives so that by the book’s epilogue, it leaves us contemplating what forces compel men to achieve power and glory when aware both will ultimately destroy them. In the end, the differences between the hero and the villain seem inconsequential, both being obsessed to the point of self-destructive hubris.  The Destiny of Fu Manchu is the finest pulp novel this reviewer has read this year.  It is going to take something truly remarkable to usurp that number one spot.  We shall see.
Share