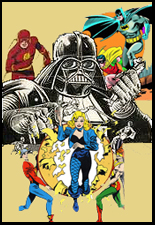 Carmine Infantino, the legendary artist, editor, and co-creator of the Black Canary, the Barry Allen Flash, Elongated Man, Deadman, Human Target, and Batgirl, and onetime publisher of DC Comics has passed away at the age of 87.

Carmine was born in his family’s apartment in Brooklyn, NY, on May 24, 1925. He started working for comics packager Harry A. Chesler during his freshman year of high school at the School of Industrial Art. His early career included stints on Airboy, The Heap, Johnny Thunder, the Golden-Age Green Lantern and Flash, and the Justice Society of America.

In 1956, Julius Schwartz teamed Carmine with Robert Kanigher to attempt to revive superheroes by creating a new version of the Flash in Showcase #4, an event which marked a beginning of the Silver Age of Comics. Carmine designed the streamlined look of the series, down to the familiar red and yellow costume. He also had famous runs on Adam Strange and Batman, ushering in the “New Look” in Detective Comics #327, complete with yellow oval around the Bat-symbol on his chest.

In late 1966/early 1967, Carmine was tasked by Irwin Donenfeld with designing covers for the entire DC line. Stan Lee learned of this and approached Carmine with a $22,000 offer to move to Marvel. DC Publisher Jack Liebowitz confirmed that DC could not match the offer, but instead promoted Carmine to the position of art director. When DC was sold to Kinney National Company in 1967, Infantino was promoted to editorial director, where he made artists Joe Orlando, Joe Kubert and Mike Sekowsky editors. New talents such as artist Neal Adams and writer Dennis O’Neil were brought into the company, and in 1970, Carmine signed on Marvel Comics’ star artist and storytelling collaborator, Jack Kirby, to a DC Comics contract.

Carmine was made DC’s publisher in early 1971, during a time of declining circulation for the company’s comics, and he attempted a number of changes. In an effort to raise revenue, he raised the cover price of DC’s comics from 15 to 25 cents, simultaneously raising the page-count by adding reprints and new backup features.In January 1976, Warner Communications replaced Carmine with magazine publisher Jenette Kahn, and he returned to freelance work, doing Spider-Woman, Star Wars, and Nova for Marvel and numerous stories for the Warren family of comics magazines. He returned to DC in 1981 on the Flash, Supergirl, Red Tornado, Dial “H” For Hero, and the Batman syndicated newspaper strip.

In 2004, he sued DC for rights to characters he alleged to have created while he was a freelancer for the company, including Kid Flash, Iris West, Captain Cold, Captain Boomerang, Mirror Master, Gorilla Grodd, the Elongated Man, and Batgirl. He wrote and contributed to two books about his life and career: The Amazing World of Carmine Infantino and Carmine Infantino: Penciler, Publisher, Provocateur. He appeared at conventions promoting these books up to the end of 2012.

Carmine was often quoted as saying his favorite character was Detective Chimp.

He won numerous awards over the years, including the National Cartoonists Society Award in 1958 for Best Comic Book and eleven Alley Awards, plus a special Alley Award in 1969 for being the person “who exemplifies the spirit of innovation and inventiveness in the field of comic art”.