The end of the 1970s and beginning of the 1980s saw fans confronted with two completely different visions for what Flash Gordon could be.

It began in the late Seventies when producers Norm Prescott and Lou Scheimer wanted to make a full-blown, live-action Flash Gordon movie, probably for television but possibly for theatrical release.  They commissioned a script that turned out to be, in their description, extremely close to the original pulp source material and potentially amazing as a film–but also far, far too expensive to produce. 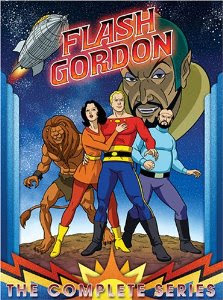 Instead they decided to create an animated version of the movie using essentially the same script.  They did so, complete with references to Hitler and the Nazis working with Ming the Merciless, but then decided to revamp the concept into a weekly animated series.  That’s how we ended up with the show as it now exists–known at the time simply as FLASH GORDON but today called “The New Adventures of Flash Gordon” to distinguish it from other versions of the property.

Needing extra money to be able to complete the project, they hooked up with film producer Dino de Laurentiis (he of “Orca” and 1976 “King Kong” fame) to help fund the show in conjunction with the production of a live-action movie.  This, of course, would result in the Sam Jones/Max von Sydow 1980 “Flash Gordon” film.  De Laurentiis saw the animated series as perhaps raising public awareness of the property in the months leading up to his big-budget movie’s release.

As it turned out, the movie was about what one would’ve (or should have) expected from De Laurentiis–an over-the-top camp-fest, best remembered today mainly for its fantastic Queen music score.

The animated series, however, lives on as a mostly very-good-to-excellent example of late Seventies animation (with rotoscoping of human movement, interesting back-lighting effects, and pioneering use of scale models for spacecraft animation).  It’s also just a flat-out great planetary adventure pulp story, with Flash first confronting (as foes) and then gathering to his side the leaders of the various other kingdoms of Mongo, in common cause against their evil ruler, Ming.

As a side note, not only was the animation cutting-edge, the music is excellent (an orchestral score–for a Saturday morning cartoon!) and the women… well, let’s just say you can tell this project was conceived as a movie for grown-ups and retrofitted into being a kids’ cartoon!  Wow!

The series is available on DVD and, with the ability to fast-forward through some of the repetitive parts necessitated by the serialized format of a weekly half-hour show and budget constraints, it is well worth your time.

(Addendum: The voice of Ming the Merciless is performed by Allen Oppenheimer, later known as the voice of Skeletor in Filmation’s “He-Man” and “She-Ra” series.  This might prove distracting to some, as the voice is quite distinct.)