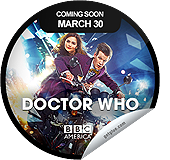 Honoring its fifty-year history, Doctor Who has been awarded a Peabody award “for evolving with technology and the times like nothing else in the known television universe.”

First presented in 1941, the George Foster Peabody Awards recognize distinguished achievement and meritorious service by broadcasters, cable and Webcasters, producing organizations, and individuals. The awards program is administered by the Grady College of Journalism and Mass Communication at the University of Georgia. Selection is made each spring by the Peabody Board, a 16-member panel of distinguished academics, television critics, industry practitioners and experts in culture and the arts.

The 72nd annual awards also honored such varied recipients as comedian Louis CK, Saturday Night Live producer Lorne Michaels, and SCOTUSBlog.com, reporting on the US Supreme Court. A complete list of winners is available on the Peabody Awards website.

Doctor Who is also up for two BAFTA Television Craft Awards this Spring, one for composer Murray Gold and one for special effects house The Mill.  The awards will be presented on April 28th in London.