Emily S. Whitten: The Marvel Heroes Game and the Latest from PAX East 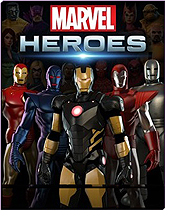 For anyone who’s interested in gaming, a whole lot of gaming news came out at the PAX East gaming convention this past weekend.

Given my devotion to Marvel and my affinity for playing any game that features Deadpool ever, I was particularly keen to hear the latest news about Marvel Heroes, the free-to-play MMOARPG (Massively Multiplayer Online Action Role Playing Game) created by David Brevik (of Diablo and Diablo 2 fame) and currently in production at Gazillion Entertainment.

Marvel Heroes, if you haven’t heard about it, is being designed as a free-to-play PC game in which players can advance through the game without spending any money (although there will be a store available for optional purchases). The story for the game, which centers around Doctor Doom and the Cosmic Cube, is written by well-known and multiple award-winning Marvel writer Brian Michael Bendis, and Marvel artists are producing comic-style cut-scenes to accompany that story.

In developing this game, Gazillion has been able to draw on all of Marvel’s considerable intellectual property, and the game is slated to feature numerous Marvel heroes and costumes, including those already announced or depicted in the model sheets on the website and in the Founders Program Ultimate Pack. (I’m particularly excited to see that Deadpool (of course), Human Torch, Jean Grey, and Iron Man will be available! I’m also looking forward to seeing what they’ll do with Emma Frost’s powers.)

Voices for the characters are being done by a number of excellent popular voice actors, some of whom are reprising their roles as Wolverine, Deadpool, and more from other media. Once obtained, playable Marvel heroes can be customized in-game, using costumes, items, and allocations of powers. Marvel Heroes will also feature multiple locations from the Marvel universe (including the Savage Land. Dinosaurs, yay!!), and allow for teaming with other players, and bonuses from teaming up.

Given all of the above, and the inclusion of awesomely fun stuff like the enhanced Pirate Deadpool costume, and the excellent trailers and videos Gazillion has released to the public so far, there is a lot to look forward to in the finished game. And since any new video game with Marvel IP is an immediate draw for me, I definitely wanted to hear the latest updates from PAX East.

And updates there were! The first of which is the newly-announced release date of June 4 of this year, with early access starting May 28 for Founders Program pre-sale pack purchasers (early access varies depending on which tier of pack is purchased). The Founders Program is ongoing, and closed beta access – which used to be reserved for the $180 Ultimate Pack – has now been expanded to the $60 Premium Pack as well.

The next bit of fresh news is that PvP will be available at launch, and that you will be able to team up during PvP. Experience points gained in PvE play will transfer to PvP, and vice-versa. Gazillion also announced that it’s planning to have end-game content which will include both team challenges and open challenges. End-game content will also feature “Ultimate Powers,” which are special abilities tailored to each hero, and which can be gained after the first run-through of the story. Having these powers leveled up will apparently be key to achieving victory during end-game challenges. These powers can be leveled up by getting and spending duplicate “hero tokens.”

…And here is where we get to the only part of Gazillion’s PAX announcements that seems troubling, rather than exciting: “hero tokens.” One of the biggest positives about a game based on Marvel IP is the ability to play as your favorite Marvel heroes. That’s been one of Gazillion’s selling points for this game since the get-go – that there will be a ton of heroes available now and in the future, from the popular to those with more of a cult following; and that players will be able to choose to play as those characters.

Prior to this past weekend, it was understood from Gazillion’s public statements that specific individual heroes would be purchasable in the game’s store, for those who didn’t want to wait until their favorite hero chanced to drop in the game. This was planned as a primary way to fund the free-to-play game. As evidence of how this mechanic was intended to work, Gazillion’s FAQ on the pre-sale page says:

“What Heroes are offered for free at the beginning of Marvel Heroes?

When you start playing Marvel Heroes, you will be able to pick a hero from a choice of several, and play through the entire game for free, finishing the story. You will only be able to choose one hero to play; other heroes may be granted as random drops throughout the game. To ensure you get to play a specific hero, you will be able to purchase them.” (Emphasis added).

This explanation was echoed by Director of Community & Customer Support Stephen Reid in a YouTube video posted Dec 28, 2012, at the 4:45 mark. In another YouTube video, posted on Feb 14, 2013, Karin Ray, Assistant Producer, says: “One thing I really like about the Premium Packs is, they come with a little extra currency. So, let’s say I purchase the Avengers Assemble pack, which doesn’t come with Black Widow; and I love her. I can take that extra currency and I can just scoop her up for my team.”

However, at PAX East, Gazillion announced a different game mechanic called the “hero token” (each token representing a specific hero). In essence, the way these tokens would work is that along with dropping randomly in the game (which is not a change from the previously announced design); they would now also drop randomly from an “item” that will be purchasable in the store as a replacement for specific purchasable heroes. In other words, there would no longer be a way to buy a specific hero; only an item that gives a chance at one. And the random hero you receive might turn out to be either one you don’t want, or one that you already have (which is where the use of duplicate tokens to level up your Ultimate Power comes in).

This… is a puzzling idea. First of all, in a game that is based on a previously established IP with devoted fans, removing the ability to guarantee the acquisition of the particular hero(es) a player already loves when paying money seems to remove their incentive to pay money for, presumably, the most expensive purchasable item in the game. Secondly, for anyone who purchased a Founders Pack prior to this announcement, one element of their pack (the in-game currency) can now no longer be used in the way it was previously advertised (as explained by Karin Ray above).

Since the announcement, there have been negative reactions to this mechanic on Twitter, in the comments of news pieces on Marvel Heroes’ PAX announcements, and on Reddit. Happily, however, Gazillion is paying close attention to their potential customers, as illustrated by this response to the feedback: “We’re hearing you loud and clear. Changes coming!” The developers have also indicated elsewhere that there will be more information on this mechanic coming very soon, and that they will be responding to feedback and announcing additional details that they hope will make people happy.

I hope that will be the case, and will report back with an update when it’s available. I’m also still looking forward to the launch of the game, and hope for even more exciting news as it gets closer.