Pro Se Productions, a leader in Action Adventure and Genre Fiction, proudly announces the latest release from its first author centered imprint and one of the best Pulp writers today!  Multiple award winning author Barry Reese has created yet another hero to add to his own modern Pulp Pantheon, which already includes such New Pulp standards as The Rook and Lazarus Gray.  Reese Unlimited, an imprint of Pro Se, presents THE ADVENTURES OF GRAVEDIGGER VOLUME ONE, the latest entry into Pro Se’s Sovereign City Project.

Her Life Began…The Day She Died.
The Adventures of Gravedigger introduces the latest masked warrior to inherit the mantle of Gravedigger. A lost soul who has returned from the grave to take up a mission of justice and vengeance, Gravedigger stalks the streets of Sovereign City assisted by her faithful agents and surprising familiar allies! She is the last defense against the criminals, madmen, and bizarre creatures that prowl in the shadows!
According to Tommy Hancock, Partner in and Editor in Chief of Pro Se, “Barry consistently brings his best to each new project.  What makes GRAVEDIGGER more than just the next Reese Unlimited title, though, is the fact that it’s a new tale he’s telling, new to him and to us.  Very few people instill personal excitement and passion for a concept into their work the way Barry does and it definitely carries over onto the written page.” 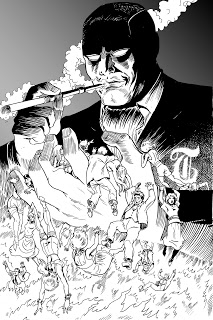 “I wanted,” Reese states, “to create something that would continue the theme of personal rebirth that populates a lot of my work but I also wanted to do something a little bit different from The Rook and Lazarus Gray. I think I accomplished both with Gravedigger. She and her allies were really near and dear to my heart… by the end of the book, I considered them all to be personal friends. I hope readers will react in the same way.”
Gravedigger walks the streets of Sovereign City with Barry’s Lazarus Gray and Derrick Ferguson’s Fortune McCall, but brings a whole new flavor to that project. Hancock, the creator of Sovereign City explains.  “Sovereign City is the best and worst of every large settlement of human beings you can imagine.  In that sort of mix, there has to be heroes and villains will pop up.  What Sovereign hasn’t had is an equalizer of sorts, someone who, while definitely a hero by definition, is not cast in the traditional Sovereign City mold for such. Barry delivers that with Gravedigger in spades, which will be needed to bury the bodies she leaves behind.”
Featuring a stunning cover by award winning Pulp Artist George Sellas and mind blowing interiors by renowned artist Will Meugniot. THE ADVENTURES OF GRAVEDIGGER is a stunning, horrifying new addition to Pulp! From Author Barry Reese, Edited by David White, with Format and Design by Sean Ali! THE ADVENTURES OF GRAVEDIGGER VOLUME ONE from Reese Unlimited and Pro Se Productions!

Available in print for $15.00 from Pro Se at https://www.createspace.com/4216431 and via Amazon at http://tinyurl.com/cnelfld !  Coming soon in digital format!