Soderbergh’s “Last” Film, Side Effects, Due on Disc in May 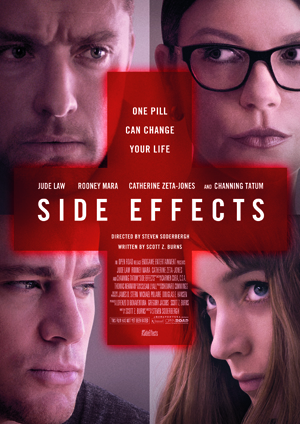 After her husband (Tatum) is released from prison for insider trading, Emily (Mara) begins suffering from terrifying anxiety and turns to psychiatrist Dr. Banks (Law) for help.  But when Banks prescribes an experimental drug for her, the side effects have chilling and deadly consequences. Full of unexpected twists, Side Effects is the sexy psychological thriller that critics are calling “wildly unpredictable!” (Marlow Stern, Newsweek).

The Blu-ray™ Combo Pack allows fans to watch Side Effects anytime, anywhere on the device of their choice.  It includes a Blu-ray™ disc, a DVD, a Digital Copy and UltraViolet™ for the ultimate, complete viewing experience.

•                DVD offers the flexibility and convenience of playing the movie in more places, both at home and while away.

•                Digital Copy provides fans with a choice of digital options to watch on devices such as iPhone®, iPad®, Android™, computers and more.

•                UltraViolet™ is a revolutionary new way for fans to collect their moves and TV shows in the cloud.  UltraViolet™ lets consumers instantly stream and download to tablets, smartphones, computers and TVs.  Now available in both the United States and Canada.