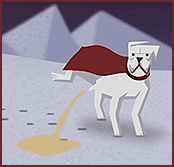 Solidly castigated for being in bad taste, Seth MacFarlane announced he was not interested in hosting the Oscars again. Watching his reception in horror, Tina Fey said “Hell, no.” So producers announced next year’s host will be Gilbert Gottfried.

To be fair, when it comes to MacFarlane I’m not necessarily your go-to guy. I thought Ted was good fun, but I have a hard time watching an entire episode of Family Guy. If I surf past it ten minutes in, I’m fine. If I watch it from the beginning but the phone rings and I actually decide to take the call, I don’t hit the TiVo button. American Dad doesn’t work for me, but it’s better than The Cleveland Show. Robot Chicken might be the finest show in the history of the medium. I loved him on Star Trek: Enterprise.

But I really enjoy MacFarlane when he’s on a talk show like Craig Ferguson or Jimmy Kimmel. Humor is in the eye of the beholder and I never, ever use the phrase “that’s not funny” without the tag “to me.” I think he’s funny, I think he’s clever, I think he might be the closest thing we’ve got in America to Ricky Gervais – except, of course, for Ricky Gervais. Who I also like. Who also was chastised for bad taste humor while hosting an awards show.

But here’s the thing. If you don’t want some bad taste on your teevee plate, don’t hire Seth MacFarlane. He’s not going to bow before the great Oscar god. That’s not what he does. He’s not Bob Hope, he’s not Johnny Carson. He’s not Billy Crystal either, although his Oscar ratings last month were 10% higher than Crystal’s the year before.

I don’t always watch the Oscars. I enjoy watching the show with my daughter because she does a fashion commentary that would make MacFarlane sound like Loretta Young. Come to think of it, that’s true of every woman with whom I’ve watched the show. Adriane wasn’t around this year, but I watched it because I like MacFarlane and, mostly, because I was hoping Ben Affleck would knock it out of the park. I might have wandered away had Christoph Waltz not copped the first award and, no, don’t blame MacFarlane or the show’s producers for Waltz’s nomination in the supporting actor category. They didn’t have anything to do with it. Grow up.

Hmmm. “Grow up.” Isn’t that Joan Rivers’ catch-phrase? Maybe she can be Gottfried’s co-host next year.