Martha Thomases: You Say You Want A Resolution… 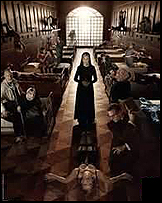 New Year’s Resolutions aren’t for me. When I was a kid, my parents would sit my sister and me down with paper and have us write some. I suppose it helped their hangovers. Since I had to do it, I hated it.

For most of the last decade, my only resolution has been to drink more water. If that.

Still, there is a new year ahead, and that means twelve months of possibilities. It would be foolish not to have a plan to take advantage of them. So here, for better or worse, is what I want to do. We’ll see if I have the resolve to follow through.

• Try new things. When I go to the comic book store on Wednesday morning (hi, gang!), it’s easy to just pick up my usual. But just as that’s a boring way to go to a restaurant when there are so many other choices, it’s no way to approach the rack. Last year, for one example, I took great joy in Resident Alien. If you didn’t see it, I highly recommend the trade. As for me, I’m going to look for more than a DC bullet in the corner.

• Don’t support what I don’t like. As I said above, I have a tendency to just look for the DC bullet. And while I’ve expanded my repertoire over the decades I’ve read comics, I tend to add titles more than subtract them. Why do I do this? Am I afraid I’ll miss something? The Internet means I can always catch up. In the meantime, I’ll save myself time, money, and indicate my displeasure to publishers.

• Proselytize. When something is good, I’ll say so, especially if that thing isn’t getting enough attention. For example, American Horror Story: Asylum  is the best television show I never hear anybody talking about. It has everything you could want in an entertainment – Nazi doctors, serial killers, demon-possessed nuns, crusading lesbian reporters, aliens from outer space – and it’s from the guys who bring you Glee, so you know everybody looks good.

• Shut up, occasionally. It’s easy for us Baby Boomers to talk incessantly about how much better we had it, back when rent was cheap, there was no HIV, and there were no rating systems. We had great movies, great comics and music that still moves us. But most of us forgot our ideals, and sold out our legacy. Patti Smith is doing Levi ads. We are in no position to tell younger people what to do.

It’s my fondest hope that I can stick to these, at least through Groundhog Day. And to keep my water bottle handy.