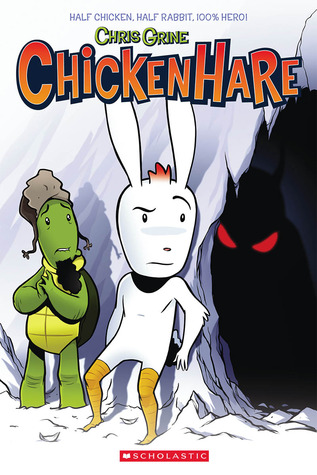 I have no idea what possessed Chris Grine to add a chicken’s legs to a rabbit’s body but he has blended two animals into the unique creature Chickenhare. Created back in 2005, Grine published two graphic novels through Dark Horse before going to the web with a portion of his third story. Now, Scholastic’s Graphix imprint has brought the first book out in full color for the first time this month.

Some compare the series to Jeff Smith’s wonderful Bone, but really, beyond some surface similarity with the artwork, they are very different. First, Bone has a deep mythology and sophistication to the characterizations and writing that set it apart from similar fare. Grine’s work is very entertaining and well-crafted but he’s intentionally creating stories for far younger readers than Smith was aiming for. While his work is All Ages, this work is clearly aimed at 9-12 year olds and for them, this is terrific stuff.

The story, originally published as The House of Klaus, opens with Chickenhare and his pal, the bearded box turtle friend, Abe already captured and about to be delivered to Klaus, the reclusive millionaire. Klaus loves to surround himself with exotic animals and ever since his beloved goat Mr. Buttons left him, he’s accumulated animals but performs sloppy taxidermy on them in order to retain them. Chickenhare and Abe are kept in cages, along with Banjo, an unexplained species called a krampus, and Meg, another unknown species. Once the four escape, the remainder of the story is an elaborate chase with a hefty dose of mysticism. Klaus is dressed intentionally to appear like a maniacal Santa Claus which is just one layer of oddity atop oddity.

The world of Chickenhare is all surface with plenty left to explore and explain but Grine’s artwork is swell, and it takes color wonderfully. He blogged last month, “I’m happy to say that since that time I have worked hard toward my goal of being able to do the kind of color I felt Chickenhare needed should the time ever come when I could relaunch the series in full color.” And he does a lovely job with the color, a mild palette that doesn’t overwhelm the characters or obscure the storytelling.

Grine’s artwork is well complemented with his writing, as the pacing is crisp and keeps things moving at a good speed for his reader. Additionally, his dialogue makes each character distinct although Klaus’ butler comes across like a watered-down Alfred. Still, Chickenhare’s heroic nature, coupled with Abe’s support and Meg’s snappy patter, make the story a joy to read.