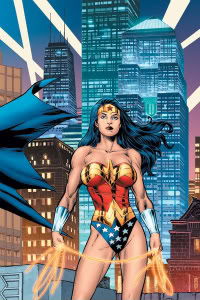 He’s the brain behind this weekly operation and, in case you’re new to comics, he’s one hell of a writer. And there’s one particular quality that sets him apart.

I don’t mean this in the sense that he does event comics (although Trinity certainly qualifies as such). What distinguishes a Kurt Busiek comic book has always been that he immediately instills the material with a sense of importance.

His big projects, like Marvels and Astro City, are perfect examples, but even in his post-Infinite Crisis take on Aquaman Busiek quickly remade that book into one that had to be read, and had to be taken seriously.

I say all this because, for a few reasons, I don’t get that sense from Trinity. So far, DC’s latest weekly series does not feel important. So far, it doesn’t matter.

Take the latest issue, number 3, for example. In summation: the stupid, purple villain Konvikt is still loose, and the JLA fights him but can’t win, and then Superman, Wonder Woman and Batman show up. They take the lead, but Konvikt punches out Superman. Elsewhere, Morgaine Le Fey and Enigma watch and offer vague comments.

Oh, and there’s of course the backup story, in which the not-really-a-hero Tarot has an inclination that she may become important at a later date.

Trinity reads more like The Brave and the Bold, a perfectly fine but perfectly frivolous DC series that features team-ups against hokey villains. Perhaps that’s what DC is shooting for with Trinity, but if so, it seems much ado about not very much.

Again, it’s still very early on in a series that’s going to go for a very long time. But we quickly need to get to the point that I don’t have to stick that caveat onto the end of each review.