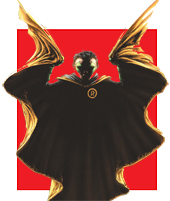 According to the hubbub, today is the day Robin dies.

Sigh. If I had to choose between becoming Robin and playing drums for Spinal Tap, I’d join a convent.

The Robin in question – and there’s been a hell of a lot of them – is the little brat who was the issue of Bat(Bruce Wayne)man and Talia al Ghul, a concept I never, ever bought. Subtlety named Damien, the li’l bastard finally came onto his own in the recent, tedious, overwrought, and too-damn-long “Death of the Family” event.

His obnoxious demeanor isn’t reason I detest(ed) his character. I do not condone his birth.

Batman – Bruce Wayne no longer exists – is the poster boy for obsessive-compulsive. All the Prozac, Zoloft, Paxil, and Lexapro combined can’t help this sucker, and yet somehow we have come to perceive his behavior as noble. If we refused to sell guns to the mentally unstable, Master Bruce wouldn’t make it to his next fox hunt.

He sublimates everything into being Batman. Everything. If it doesn’t play a role in his work, he doesn’t have patience for it. This is clear, and as consistent over the past several decades as anything ever is in the DCU. More so. In fact, much more so.

Therefore, I simply do not believe Batman would ever have sex with Talia. But if he did, it wouldn’t result in Li’l Damien. It would result in the return of the Comics Code Authority.

It might even prompt the resurrection Dr. Fredric Wertham. Check out my colleague Denny O’Neil’s ComicMix column tomorrow.

I suspect there’s already a betting pool on how long Damien stays dead. If history is any guide, there will be still another Robin (I’m guessing a female, but that’s just a guess) and, sometime after that, we will endure another multipart pseudo-event that will result in the brat’s resurrection. And we don’t simply have the experience of Dick Grayson, Jason Todd, and Tim Drake (Was he ever killed? I get confused.) We have Damien’s resurrection-happy grandpappy, who has been revived more times than Kenny McCormick.

What goes around comes around. Killing a Robin – or anybody else in the DC Universe – is as original as a bag of potato chips. “Bet you can’t kill just one.” Resurrecting the dead is even less original. It’s boring.