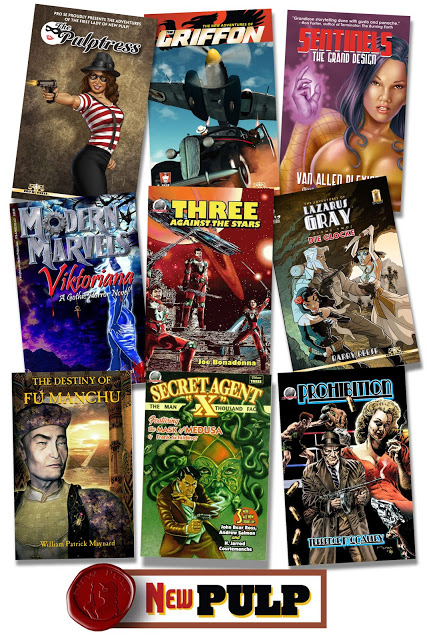 For the first time since its inception, the Windy City Pulp & Paper Convention will be devoting a five hour block to the ever popular New Pulp Movement in what they have labeled New Pulp Sunday.
“Given the number of New Pulp creators and publishers that attend our convention, we felt devoting a day of programming to the energetic world of New Pulp was natural and would be fun for attendees.  Hopefully it will introduce some folks to the wide variety of material being published today under the New Pulp banner.”  Doug Ellis, co-founder and promoter of the Windy City Paper & Pulp Convention.
To that end Ellis reached to out to several of his New Pulp contacts, amongst them Ron Fortier, Managing Editor of Airship 27 Productions and Tommy Hancock, Managing Editor of Pro Se Productions.  With a list of their colleagues planning on attending this year’s convention, Fortier and Hancock put together a program schedule that would include three panels and eight authors’ readings.  Joining them in these events are noted New Pulp Creators Chris Bell, Rob Davis, Joe Bonadonna, David C. Smith, Wayne Reinagel, William Patrick Maynard, David White and Terrence McCauley.
For the past four years the Windy City Convention has hosted the Pulp Factory Awards, given out by one of several New Pulp groups that celebrate the best in new pulp fiction and artwork.  “The creation of New Pulp Sunday is a logical expansion of the con’s support for all things pulp related,” said Fortier.  “We are thrilled at this recognition ofNew Pulp and promise all attendees a five hour block of truly wonderful readings and panels that clearly demonstrate the continued evolution of pulp fiction from the old to the new.”
Hancock added, “Everyone involved in the New Pulp Movement knows where the roots of what we do lie, exactly in the fiction that the Windy City Pulp And Paper Convention has helped preserve and promote since its inception.   It’s an honor for those of us who feel like we’re walking in the shadows of giants to be welcomed into the Convention program in such a way.  It’s also an opportunity to let fans of Pulp of all kinds know that the sort of stories they enjoy in the classic Pulps are still being written today.”
The complete, detailed New Pulp Sunday schedule will appear in the convention’s program booklet.
Windy City Pulp and Paper Convention
April 12 – 14
Westin Lombard Yorktown Center
70 Yorktown Center
Lombard, IL 60148