CLASSIC JUNGLE ADVENTURES
Airship 27 Productions, a leader in the New Pulp Fiction movement, is thrilled to announce the released of their latest title, JUNGLE TALES Vol.One. 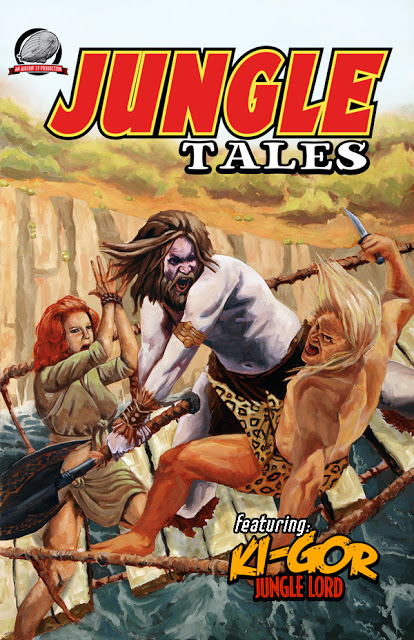 One of the most popular sub-genres of the classic pulp magazines were those with jungle settings. With the success and popularity of Edgar Rice Burrough’s Tarzan stories, editors began clamoring for similar tales featuring jungle heroes. Soon dozens of cheap loin-cloth wearing imitators were popping up everywhere, including a few jungle queens to add spice to the mix.  By far the most successful of these Tarzan clones was the blond-haired Ki-Gor, the Jungle Lord whose adventures appeared regularly in the pages of Jungle Stories magazine.
Now Airship 27 Productions offers up this new collection with three brand new adventures of Ki-Gor and his lovely, red-headed mate, Helene, as they travel into the mysterious, uncharted jungles of Africa.  Penned by Aaron Smith, Duane Spurlock and Peter Miller, here are a trio of fast paced tales that have the Jungle Lord discovering a hidden village of Vikings, crossing paths with dinosaurs in a lost valley and battling cannibals to save the life of a benevolent jungle princess.  This is the pulse-pounding action and thrill-a-minute adventure fans have come to expect from the classic jungle pulps.
“It’s hoped,” said Managing Editor, Ron Fortier, “that each new volume of this title will shine the spotlight on a different classic pulp jungle hero.  Maybe even a jungle queen or two.”  This premier features a stunning cover by painter Bryan Fowler with magnificent interior illustrations by Kelly Everaert.  JUNGLE TALES Vol.One kicks off another new series pulp fans are sure to appreciate and enjoy.
AIRSHIP 27 PRODUCTIONS – Pulp Fiction For A New Generation!
$3 PDF digital copy available at –
(airship27hangar.com)
From Amazon at –
(https://www.createspace.com/3914102 )
And coming soon from –
(http://indyplanet.com/store/)
Share