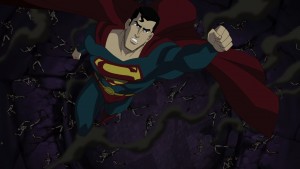 The trailer for this May’s release was missing from The Dark Knight Returns Part 2 but was subsequently released online. Now come the complete details of the next direct-to-DVD film from Warner Bros. Home Entertainment.

The fun vocal casting takes television stalwarts from popular genre series and uses them in other iconic roles. Here is the complete press release.

BURBANK, CA (February 21, 2012) – A destructive force is devastating planets across the galaxy – with Earth next in its sights – and even Superman may not be capable of halting the terror in SUPERMAN: UNBOUND, the next entry in the ongoing series of DC Universe Animated Original Movies. Produced by Warner Premiere, DC Entertainment and Warner Bros. Animation, the all-new, PG-13 rated film arrives May 7, 2013 from Warner Bros. Home Entertainment as a Blu-ray™ Combo Pack ($24.98 SRP) and DVD ($19.98 SRP), On Demand and for Digital Download. The Blu-ray™ Combo Pack will include UltraViolet™*. 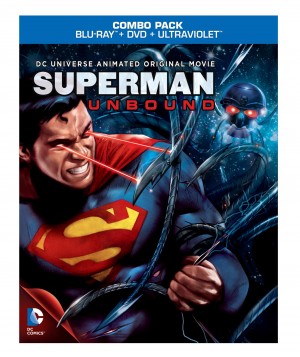 Based on the Geoff Johns/Gary Frank 2008 Action Comics storyline “Superman: Brainiac,” SUPERMAN: UNBOUND finds the Man of Steel aptly handling day-to-day crime while helping acclimate Supergirl to Earth’s customs and managing Lois Lane’s expectations for their relationship. Personal issues take a back seat when the horrific force responsible for the destruction of Krypton – Brainiac – begins his descent upon Earth. Brainiac has crossed the universe, collecting cities from interesting planets – including Supergirl’s home city of Kandor – and now the all-knowing, ever-improving android has his sights fixed on Metropolis. Superman must summon all of his physical and intellectual resources to protect his city, the love of his life and his newly-arrived cousin.

“SUPERMAN: UNBOUND adds an all-new chapter to the growing legacy of animated films featuring the Man of Steel and his epic challenges to maintain peace on Earth,” said Mary Ellen Thomas, Warner Home Video Vice President, Family & Animation and Partner Brands Marketing. “Matt Bomer’s voice epitomizes the All-American hero that is Superman, and John Noble counters that tone with a commanding, chilling delivery for Brainiac. A superhero is only as good as the depths of his opposition, and Noble brings out the best in his villainous portrayal of Brainiac.” 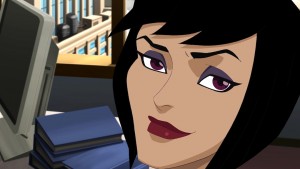 SUPERMAN: UNBOUND Blu-ray™ Combo Pack has over 4 1/2 hours of exciting content, including: