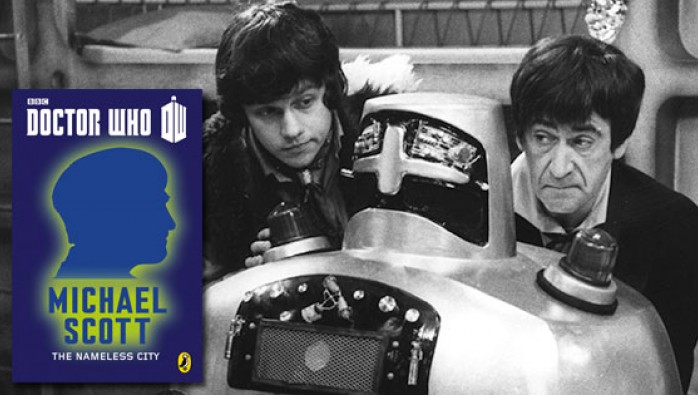 The BBC and Puffin books are continuing the monthly releases celebrating the 50th anniversary of Doctor Who. The second adventure, starring the second Doctor (played by Patrick Troughton) will be titled The Nameless City, written by Michael Scott, author of The Secrets of the Immortal Nicholas Flamel

The synopsis promises new adventures and a new foe for The Doctor:

“When Jamie McCrimmon brings the Doctor a mysterious book, little does he realise the danger contained within its pages. The book transports the TARDIS to a terrifying glass city on a distant world, where the Archons are intent on getting revenge on the Time Lord for an ancient grudge.”

Apparently featuring Jamie as The Doctor’s Sole companion, it is likely this adventure takes place in the fan-theorized “Season 6B”, a period of time after the events of Troughton’s last adventure The War Games, but before the first Pertwee adventure, Spearhead from Space.  Many fans, including now Who writer Paul Cornell, surmised that for a period of time, the Time Lords  had The Doctor perform certain tasks for them, before his eventual regeneration.  The Tardis Data Core wiki has a good run-down of the theory, which has effectively been accepted into continuity by the BBC.

The book will be released on 2/23, and can be pre-ordered via Amazon.com.