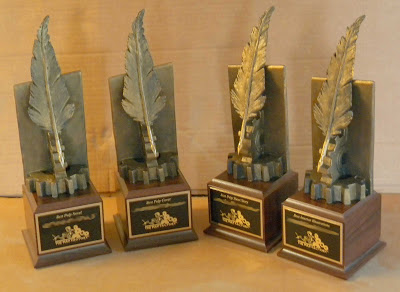 The 2012 Pulp Factory Award categories include Best Pulp Novel, Best Pulp Short Story, Best Pulp Cover, and Best Pulp Interior Illustrations. Nominations and voting is conducted by members on The Pulp Factory, but you do not have to be a member to be nominated or to win. Award winners are announced and presented at the Windy City Paper & Pulp convention in Lombard, IL April 12 – 14, 2013.

Congratulations to all nominated and best of luck, pulpsters.

Here are the nominees: