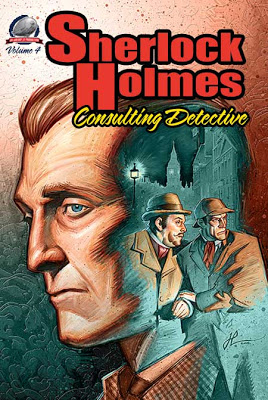 Airship 27 Productions proudly announces the release of the fourth volume in its most successful anthology series to date; SHERLOCK HOLMES – CONSULTING DETECTIVE.  “These are the books our fans keeping demanding more of,” reported Ron Fortier, Managing Editor of Airship 27.  “Readers around the world just can’t seem to get enough of the Great Detective.  Considering the popularity of shows such as SHERLOCK on BBC and ELEMENTARY on NBC, it’s clearly obvious that the crime solving team of Holmes and Dr. Watson are still as popular as ever.”

The time and place, Victorian England on the cusp of a new century where the marvels of science will spur the Industrial Revolution to new heights of cultural wonder. And yet amidst this societal upheaval, the dark elements of human kind continue to worm their way through the streets of London and its surrounding countryside.  Murder and mayhem remain and thus the work of Sherlock Holmes continues; his powers of deductive reasoning the crucial bulwark to stem this tide of villainy.

Here are five new adventures of Holmes and Dr.Watson written in the traditional style of his creator, Sir Arthur Conan Doyle.  Writers I.A. Watson, Aaron Smith, Bradley H. Sinor, Bill Thinnes and Andrew Salmon deliver a quintet of truly memorable cases to challenge the famous crime fighting duo.  From the murder of a man who collects clockwork automatons to the theft of a valued Japanese sword, our heroes are once again called into action confronting a diverse set of mysteries guaranteed to entice the world’s greatest Consulting Detective.

Fortier relishes the debut of this new volume considering the overwhelming acclaim of the first three in the series.  “Amongst those books were four Pulp Factory Award winners,” he recalls happily.  “Two for Best Pulp Short Story of the Year, one for Best Pulp Cover and another for Best Interior Artwork.  The literary and artistic bars for this series have been set extremely high and we would have it no other way.”

The Pulp Factory Awards denoting the best pulp story and art from the previous year are voted on by the members of the Pulp Factory Yahoo Group and presented to the winners each year at the Windy City Paper & Pulp Show.

Sporting a cover by Chad Hardin with interior illustrations and design by Rob Davis, the
fourth volume in this bestselling series also features a fascinating essay, “The Mystery of
Mr. Holmes,” by I.A. Watson.  Here is grand adventure as Sherlock Homes fans around
the world have come to expect from Airship 27 Productions.

PULP FICTION FOR A NEW GENERATION!

Now Available at Create Space – (https://www.createspace.com/4137813)
At the Airship 27 Website – (http://robmdavis.com/Airship27Hangar/index.airshipHangar.html)
At Amazon & Kindle within a week.
Then at Indy Planet (http://indyplanet.com/store/)

Airship 27’s Ron Fortier discussed Sherlock Holmes – Consulting Detective Vol. 4 on the Earth Station One podcast. You can listen to that conversation here.