FORTIER TAKES ON’ TWO GRAVES’ FROM PRESTON AND CHILD! 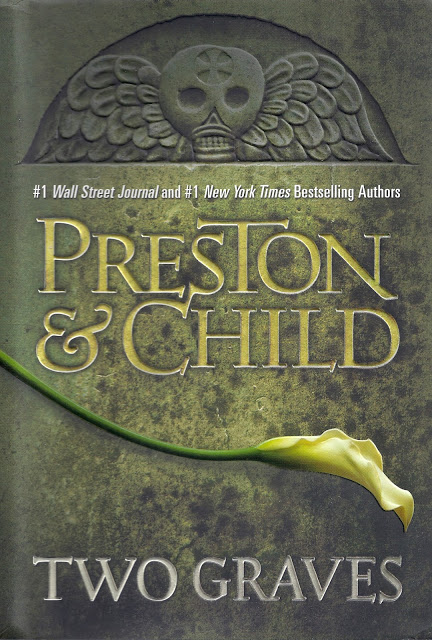 Several years ago a very good friend gave me two paperback novels for Christmas.  They were “The Cabinet of Curiosities” and “Still Life with Crows,” both by Douglas Preston & Lincoln Child. They were my first introduction to Special FBI Agent Aloysius Pendergast and one I’ve been most grateful for ever since.
The Pendergast books are the epitome of modern pulp thrillers harkening back to the grand old hero magazines of the 1930s and they clearly evoke the same escapist fare prevalent in those series.  Upon becoming a fan of the tall, gaunt Southern bred Pendergast, it soon became clear to me that he was the true heir to famous pulp avenger of old.  For if Clive Cussler’s sea-going hero, Dirk Pitt, can be called the modern day Doc Savage, something many of his ardent followers still claim, then Pendergast is our new Shadow.  Like that black clad nemesis of evil who “knew what lurked in the hearts of men,” Agent Pendergast is a most unique and extraordinary character.  He is wealthy and thus his career is an avocation of personal interest.  He is learned with several degrees, skilled in both philosophical and martial arts while a crack shot with most weapons.  Add to this the fact he also has knowledge of obscure and ancient arcane practices and rituals while possessing certain uncanny abilities which border on the supernatural and you have a genuine pulp hero for our times.
Since discovering this series, I’ve relished each new entry and have never once been disappointed by authors’ efforts.  Along with such an unforgettable main character, the books feature many truly amazing supporting characters from Pendergast’s allies ala New York Lt. Detective Vincent D’Agosta to his exotic young ward, Constance Greene who, though she appears to be in her early twenties, is actually over a hundred years old because of a strange elixir that has prolonged her youth. The genius of Preston and Lincoln is how they make the fantastic elements of each book as believable as the normal ones.
Now “Two Graves” ends a trilogy story arc begun in “Fever Dream” and continued in “Cold Vengeance.”  For twelve years, Agent Pendergast believed his beloved wife, Helen, had been killed by a lion on their honeymoon safari in Africa.  When evidence surfaces that proves her death was faked and that she might still be among the living, it propels Pendergast on the most important case he has ever confronted.  To say the story has been a roller coaster of action and suspense would be a truly gross understatement and the revelations in this final chapter are mind-boggling.  From a psychotic serial killer in Manhattan to a hidden Nazis eugenics camp in the jungles of Brazil, “Two Graves” is hands down the best Agent Pendergast novel ever written and this fan would never make that claim lightly.  Were the series to end at this point, I would hazard most readers would be content with the established canon as it now stands.
Of course, being fans, we will always want more; lots more.  But being a somewhat discriminating reviewer, it is difficult for me to imagine Preston and Child topping this book.  It is clearly their Agent Pendergast masterpiece.
Share