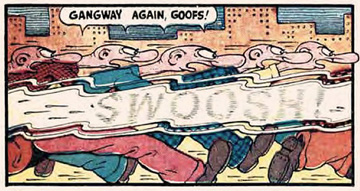 The creative life has its own circle of hell. The blank page, the blank canvas, the empty stage, all exist to remind us of our failure. When one is a professional with a deadline, the taunting is even more painful.

For those of us in the audience, it can also be excruciating. I don’t like songs about how difficult it is to be a rock star. I don’t like novels about how misunderstood teaching assistants can’t get laid.

But then it can also be fun. The Stunt Man is a wonderful movie about making movies. My Favorite Year is a laff riot about writing television shows, and it’s one of my favorites. All That Jazz? It’s show time! 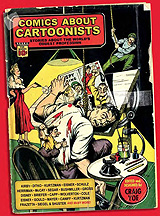 And now, Craig Yoe has put together an anthology of comics about creating comics, Comics About Cartoonists. It collects sketches and finished stories, newspaper strips and comic book covers from some of the most celebrated creators of the last century.

To meet this deadline, I read the whole thing in one sitting, and that’s not something I would recommend to you, Constant Reader. There are only a few plots. Cartoonist has no idea, so he fells asleep and his characters have an adventure. Cartoonist isn’t appreciated by his editor. Cartoonist stumbles on plans for an alien invasion. Beautiful girl doesn’t realize that the dumpy guy who looks like the cartoonist is beautiful on the inside. I’m sure I would have enjoyed these stories more if I read them one at a time, instead of in a lump.

And then, it has Basil Wolverton, with a story that not only exhibits his energetic wit and exuberance, but dialogue that is so much fun it should be read out loud. I would pay for Childish Gambino to record it.

My favorite comic stories about comics were the ones Cary Bates and Elliott S. Maggin wrote themselves into with the Justice League. Yoe also doesn’t include Grant Morrison’s appearances in Animal Man. The rights were most likely not available, and all of these are too self-consciously meta for the book’s shaggy-dog aesthetic.

On the other hand, the book’s endpapers are old ads promising to teach you — yes, you! — how to make big money and attract beautiful women as a cartoonist. “Cartoon Your Way to Popularity and Profit” says one ad that goes on to promise you a “Laugh Finder.” That ad alone is darker and more meta than anything on the market today.