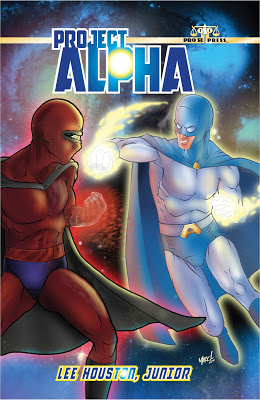 From Elsewhere In The Multiverse:
If you yearn for the Silver Age, when heroes and villains were easily defined, Project: Alpha is for you.  If you miss the old-school space operas where dashing men and beautiful women had two-fisted adventures on strange planets, Project: Alpha is for you.  Lee Houston Jr.’s second series character (The first, Hugh Monn, is a hardboiled detective who plies his trade on a distant planet) is a super-hero/sci-fi mash up that will be a delight for those who want a gentler, less dark adventure for their heroes.  I sat down with Lee to talk about the series, writing and how the face of mainstream comics has changed since we both were younger.

Up next on Elsewhere In The Multiverse is Jeff Deischer.
Stay tuned.