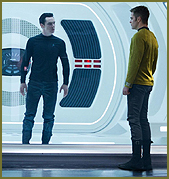 Is it Khan Noonian Singh or is it Gary Mitchell? Or could it be someone else from out of the Star Trek TOS mythos?

Ever since the first teaser debuted on theater screens around the world, Trekkers have been debating the identity of the villain.

There are two big reasons, I think, that many fans are convinced it’s Khan.

First, the voiceover talks of vengeance and watching loved ones die, and every good Trekker knows that Khan was driven by a need to avenge himself on Kirk for several reasons: (1) Kirk, a product of “ordinary” conception, defeated the “superior intellect” of the genetically manipulated Khan; (2) Kirk never bothered to check up on Khan and his followers, essentially marooning them on Ceti Alpha V, and (3) most probably, psychologically most importantly, that historian who betrayed Kirk and the Federation just because Ricardo Montabalm was one hot, sexy roll in the hay, the one who went into exile with Khan? (BTW, I never understood why Khan would love and respect a traitor. This was a man who goes on and on about loyalty.)  She died, killed by one of those scarab-eels that was the “planet’s only remaining indigenous life form.

Second, there’s that scene in the trailer that’s especially evocative of The Wrath Of Khan in which, separated by transparent aluminum(?) paneling of the dilithium chamber, Kirk and Spock’s hands form mirror images of each other in a “live long and prosper” symbolic good-bye.

Khan Noonian Singh was never in Starfleet and the trailer and other promotional material points to someone within the organization. The trailer also gives the impression that the bad guy is someone with immense, inherent power, and Khan, for all his intellect, still had to depend on scarab-eels and the Genesis devise to do his dirty work.  And this is just a minor point, but Khan Noonian Singh’s heritage is Punjabi, not British Isles. Of course, J.J. Abrams doesn’t have to stick with that, but so far in his reboot, all the characters have remained true to their traditional genomes.

Gary Mitchell, for those of you who have never seen the episode (Where No Man Has Gone Before) was Jim Kirk’s best friend. Mitchell had saved Jim’s life more than once, and had even maneuvered a blonde lab technician into Kirk’s orbit. Ostensibly this little blonde lab technician was Carol Marcus, whom Kirk nearly married. But at some point in their careers, Kirk reported Mitchell for failing in his duty, and Mitchell’s chance at promotion was downgraded. Still, Kirk believed in his friend’s potential, and brought him onto the Enterprise as helmsman.

On an exploratory mission to the edge of the galaxy, the Enterprise hits some kind of energy barrier that does enough damage to the ship that Kirk orders the ship out of there. The energy barrier also kills a bunch of crewman, and knocks out Mitchell. Upon wakening, his eyes glow silver, and he begins to display psionic powers, including telepathy and telekinesis.

Eventually Mitchell becomes so powerful that “absolute power corrupts absolutely.” Spock advises Kirk to kill Mitchell while “he still can,” but Kirk can’t bring himself to do that, deciding instead to maroon Mitchell on a planet. But Mitchell has now mutated into a being with god-like power, and Kirk is forced, in the end, to kill him.

Anyway, what I’m thinking is that in the reboot version, Kirk was able to maroon Mitchell on the planet; only now Mitchell has escaped, and has returned to wreak not only vengeance on Kirk and those he loves, but on Starfleet for daring not to appreciate Mitchell’s abilities.

And the official teaser from Paramount reads:

In the wake of a shocking act of terror from within their own organization, the crew of The Enterprise is called back home to Earth. In defiance of regulations and with a personal score to settle, Captain Kirk leads his crew on a manhunt to capture an unstoppable force of destruction and bring those responsible to justice.  As our heroes are propelled into an epic chess game of life and death, love will be challenged, friendships will be torn apart, and sacrifices must be made for the only family Kirk has left: his crew.

That would certainly describe Gary Mitchell, a.k.a. John Harrison.

And a chess game is mentioned.

In the original episode, chess is played, and it’s a theme in the story. (Okay, I’m reaching.)

Then again, it could be Q.