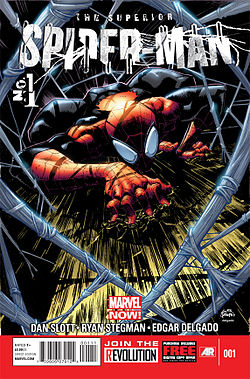 That last page is going to calm a LOT of people down.

With the seven hundred issue run of Amazing Spider-Man ended, Marvel has started this new odd hybrid Spider-Man in a new title, Superior Spider-Man, which premiered this week.  Writer Dan Slott has presented one of the most controversial plot twists in comics in some time and set it up in a new book.  And it works exceedingly well. (Spoilers ahead.)

In case you’ve been off-planet for a while, there’s been a bit of a shake-up in the pages of Spider-Man.  Peter Parker is dead, his body taken over by Otto Octavius AKA Doctor Octopus.  Fandom has gotten up on its hind legs over it, but after having actually READ the ferschlugginer thing, realized there’s a lot of story here.

Octavius, being presented with a life’s memories of responsibility by the dying Peter Parker, has dedicated himself not to destroy Spider-Man’s life and reaping its rewards, as so many other body swap and impersonation stories have, but by playing the same game as Parker, and beating him at that game, by being the better man.  It is, at its core, the classic argument Luthor always makes about Superman.  If Superman wasn’t around, Luthor could apply his genius to improving the world, instead of trying to destroy the big blue boy scout.  That’s exactly the opportunity Octavius has, and he decides to win in spades.

Spider-Otto fights and defeats a new Sinister Six, partially because it’s the kind of thing Spider-Man does, and partially because he’s personally offended that the brand he created has been so weakened as to allow in members like Big Wheel and the Living Brain.  (Yes, folks, Dan has not forgotten how to reached down to the bottom of Marvel’s toy box, pull up the most broken and neglected residents, and realize that like Charlie Brown’s Christmas tree, they just need a little love).  He makes mincemeat of them in their first battle, and in the second, with the benefit of prep time, makes utter fools of them, in front of an audience.

The new “superior” Peter Parker has new confidence and conviction in his job at Horizon Labs, and parades around in a double-breasted labcoat and goggles that would make Dr. Horrible or Rudy Coby green with envy.  He pours himself into his work with a vengeance, creating new inventions that will make Spider-Man a better hero, make Horizon (and himself) a lot of money, and increase his reputation and prestige by an order of magnitude.

“His” being Peter Parker’s.  Otto is still having a problem accepting that the advances that his intellect will bring will all be ascribed to Parker.  And that there is the core of the awesomeness of the twist of the book.  Like Cyrano de Bergerac,  Otto is allowing someone else to succeed with the help of his brilliant mind.  If things go perfectly, Peter Parker and Spider-Man will be better heroes than ever, and Otto Octavius will still be dead.  And it’s eating him up inside.

Oh, and we find out what Otto’s favorite TV show is.

Ryan Stegman’s art is densely packed without being cluttered.  There’s a LOT of story on each page, and the panel designs are creative and still easy to read.  The art has a dark, almost noirish tone, reflecting the fact that the book has a new lead, a confused man who’s not quite sure of himself, both in who he is, and why he’s making emotional choices like saving bystanders instead of the smarter move of just retreating.

The last page makes it clear that this status will not quo forever, much to the relief of the easily enraged.  But as should be true of all good stories, the road to that eventual ending looks like it will be entertaining, so much so that by the time we get there, you just may be torn as to whether or not you want Otto to go.