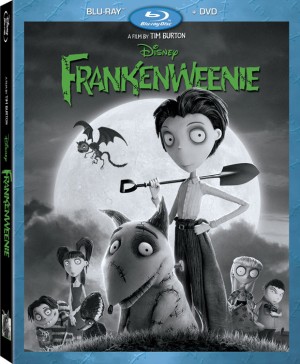 Most of ComicMix’s readers know that Tim Burton made his live action Frankenweenie short (starring Barret Oliver, Shelley Duvall, and Daniel Stern) while at Disney and was too quirky for the Mouse House so left to carve out a career of his own. The short was visually stylish, creepy, and filled with affection for the horror films of his youth. Since then, he has created his own brand of horror (Edward Sciossorhands, Legend of Sleepy Hollow) and has reinterpreted classic works (Batman, Alice in Wonderland, Dark Shadows, Planet of the Apes) with varying success.

Last fall he finally released a feature-length version of Frankenweenie and while it underperformed at the box office, it is a creatively satisfying effort, and a great family feature. This can now run with The Nightmare Before Christmas as annual Halloween viewing for which I am grateful.

As with most great tales, this is a love story. In this case, it’s about a boy, Victor (Charlie Tahan), and his dog Sparky. When the beloved pet dies in a car accident, Victor uses his scientific genius to bring Sparky back to life. While some see this as a noble thing, Victor’s parents, Mr. and Mrs. Frankenstein (Martin Short, Catherine O’Hara), worry that their son is overly involved with the dog and lacks human friends.

A boy and his dog is classic and Sparky is your typical dog, although he now has trouble keeping all his parts intact, notably his tail.

When the local boys hear about the successful experiment, things begin to go off the rails. Victor may have Sparky back but things have certainly not gone as planned and that’s where the film’s charm and humor shines through in a well-plotted expansion of the original tale. That said, things do drag the further we move on, as if Burton said all he had to say and needed to stretch to get to a proper running time, 87 minutes, for a feature.

Burton stayed true to his vision, retaining the black and white, evoking the great Universal horror films of the past. And like them, this is filled with winning supporting character — Mr. Rzykruski (Martin Landau), Edgar (Atticus Shaffer) —  enlivening the overall story.

This is the most entertaining video release of the week and comes highly recommended.