ONE FAMILY. ONE LEGACY. ONE PROBLEM. 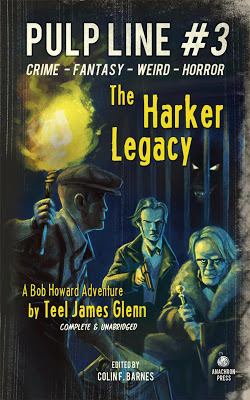 Anachron Press has announced that The Harker Legacy, a novel by New Pulp Author Teel James Glenn is now available as an ebook at Amazon and Lulu. Paperback also available at Amazon.

One Family. One Legacy. One Problem.

Texan writer, Robert Howard, travels to London for inspiration for his stories when he finds himself in a street brawl. Aided by a struggling actor named William Henry Pratt, Howard sees off the thugs and sets about returning the favor for his newly injured and incapacitated friend. Howard agrees to take over his role as a ‘whipper-in’ on an upcoming foxhunt hosted by the Harker family.

Howard meets the Harker’s and learns about their travels in Hungary and Romania, before settling in England once more to closely guard a terrible secret.

Putting his considerable horse-riding skills on show, Howard catches the eye of Gwendolyn Harker, the daughter of Jonathan and Mina. Her parents regard Howard’s intentions with suspicion, and their dark and deadly legacy is revealed before him, leaving him with a fight for his life.

Can Howard unravel the secret and save himself before it’s too late?

Robert E. Howard, Boris Karloff and Mina Harker…what more do you need to know?
Buy it today on Amazon or the Anachron website!