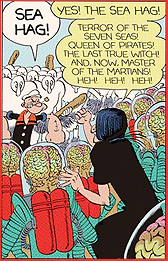 It used to be, when I was about to go home from the San Diego Comic-Con or some other show that required a stupidly long plane ride, I’d drop by the dealer’s area (you know, that ever-shrinking portion of the main floor where people would actually sell comic books at a “comic book convention”) and I’d blow about twenty bucks on stuff to read on the return trip. These purchases were almost exclusively of “funny” comic books.

Sadly, we have come to the point where, in the world of contemporary comics, the phrase “funny comic books” has evolved from a redundancy to an oxymoron and the funniest comic around these days is Deadpool – a title with a death count high on the Tarantino scale.

No, the funny books I’m referring to were, well, funny. One of my favorites was Bud Sagendorf’s Popeye, a somewhat maligned title because the Snoots insist upon comparing it to E.C. Segar’s newspaper creation. Whereas Sagendorf was Segar’s assistant on said feature, they were produced at different times for different audiences and they occupied different landscapes. You tell a story differently in a newspaper strip, usually ending each day with both something resembling a punch line as well as a hook or a cliffhanger to bring the reader back. In comics back in those ancient times, stories were self-contained with a beginning, a middle and an end.

And Bud Sagendorf’s Popeye was brilliant. He certainly got the characters right, employing Segar’s entire cast and adding a few great characters of his own. The stories were as compelling and entertaining as anything on the stands at the time – and we’re talking about a period that encompassed Carl Barks’ Uncle Scrooge, John Stanley’s Little Lulu, and Shelly Mayer’s Sugar and Spike.

Yes, I just compared Sagendorf to Barks, Stanley and Mayer. If you don’t like that, well, in the words of Mike Baron, you can bite my Twinkie.

Our pal Craig Yoe has brought this stuff back to the masses in IDW’s Classic Popeye series, and I see they’ve begun to anthologize their “early” issues (I think they’ve published six issues so far, so “early” is relative only to Doctor Who fans).

But that’s not why I’m writing this. Fooled you, didn’t I? Opening with a 385-word digression. My journalism teachers would plotz. No, I’m writing about a one-shot comic released last week that, on the face of it, seems like a cheesy exploitation gimmick or, in other words, my kind of comic book.

The aforementioned folks at IDW possess the Mars Attacks license as well as the Popeye contract. People think this is because IDW’s Chief Operating Officer Greg Goldstein was a honcho at Topps, the bubble gum people who created and own Mars Attacks. I don’t think that’s the reason. I think it’s because Goldstein has the same strain of arrested development that I do and, instead of growing up, we got into the comics business.

So IDW is doing what every other publisher does with such a property: they’re squeezing the licenses until their eyes pop. Which is why we’ve now got, of all things, Mars Attacks Popeye.

The effort of writer Martin Powell and artist Terry Beatty (yep, the guy who draws The Phantom Sundays and Ms. Tree and Batman and stuff) and edited by the professionally unusual Craig Yoe and Clizia Gussoni, this is one funny, clever and well-produced comic book. It didn’t have to be that; it easily could have been a stupid cheesy exploitation gimmick. No, in the finest American tradition, it is a solidly amusing and entertaining cheesy exploitation gimmick.

Stylistically, Mars Attacks Popeye is done as a Popeye comic in the finest Sagendorf tradition. It employs almost all of the Popeye cast going back to 1919 (not that I really should give away Olive Oyl’s true age) and they take on the advancing army of bubble gum card fame – this time, under the provocation of Popeye’s very own Doctor Doom, the Sea Hag.

Look, you’ve probably got an extra four bucks on you, but if you don’t roll a school kid or something and check it out. It’s about time we got us a funny funny book.

THURSDAY: Dennis O’Neil Gets In A Crossword