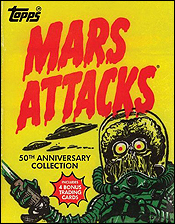 There’s a seminal moment in every weirdo’s life where we experience something so outrageous our worldview is altered severely and forever. For Ray Bradbury and Michael Moorcock, it was Edgar Rice Burroughs. For nascent NASA scientists, it was Ray Bradbury and Buck Rogers. EC Comics begat a generation of filmmakers, satirists, and cartoonists. I have no doubt we will be appreciating the influence of The Simpsons and South Park as its early adopters enter the creative workplaces.

For me, it was Mars Attacks.

I love to collect things. I suspect if comic books were unnumbered I wouldn’t have made it to the Marvel Age. So I would dutifully check out the counter-spaces at my local drug stores to see what the Bazooka Joe boys at Topps were offering in the realm of what we now call “non-sports cards.” Their Civil War News series was as informative as it was gutsy. Their Space Race and Funny Monsters cards brought great entertainment to my pre-pubescent little brain. But nothing – absolutely nothing, not Rocky and Bullwinkle, not Mad Magazine, neither Ernie Kovacs nor Steve Allen – prepared this 11 year-old proto-nerd for the glory and the horror of Mars Attacks.

Briefly for those who are not in the know, Mars Attacks was a set of 55 trading cards issued in 1962 that told the grisly story of an invasion from space by everybody’s favorite bug-eyed naked-brain Martians. On the front was a masterful painting by the great Norm Saunders based upon sketches by the great Bob Powell and the great Wally Wood. On the reverse was the next part of the invasion narrative. Cattle were torched, subway cars were eaten by giant ants, soldiers were slaughtered, dogs were vaporized in front of their youthful masters.

The concept and story, created by Topps’ creative director (and, later, seminal comics fan publisher) Woody Gelman and staff writer Len Brown, later of T.H.U.N.D.E.R. Agents fame, was breathtaking because it was over-the-line. Way over the line. So far over the line you couldn’t see the line in your rearview mirror if you stopped right after you crossed it. Simply put: in 1962 you did not torch dogs and soldiers and cattle and wrap it up in wax paper with a slice of bubble gum.

Were adults offended? Holy crap, yes! You’d think the Martians actually invaded and turned out to be Commies. Topps was inundated with complaints and boxes were removed from store counters. At first, the Bazooka-boys thought they’d simply tone down some of the more objectionable cards, but instead they squeezed the toothpaste back into the tube and withdrew their product… leaving nothing but the legend in its wake. A highly collectible legend.

To celebrate the 50th anniversary of this historic event, Abrams ComicArts has released a hardcover book surprisingly called Mars Attacks. Forwarded by Len Brown and backwarded by Norm Saunders’ gifted daughter Zina, all the cards are reprinted (both sides) in their full glory along with the surviving sketches as well as the 1994 sequel cards and other great stuff, including artwork from Zina Saunders, Jay Lynch, Timothy Truman, Frank Brunner, Sam Kieth, Keith Giffen and a whole lotta other swell folk.

In addition to the aforementioned 1994 sequel cards, there have been several attempts to revive Mars Attacks including at least three comics series and a grandiose Tim Burton movie (forgive my redundancy). These have succeeded to varying degrees, but I think the concept is truly a product of its times. The bar of outrageousness has pole vaulted in the past 50 years, and these cards would barely raise an eyebrow if issued today.

But for its time, in its time, Mars Attacks brought the energy of rock’n’roll to the B-movies of the drive-ins and put it all on the doorsteps of the nation’s 11 year-olds. Its quick removal trusted it into legendary status. Abrams’ new book is a very worthy tribute.