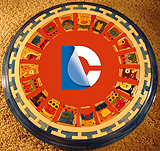 According to many interpreters of the Mayan calendar, December 21, 2012 was to be the last day of the world. Were we going to go quietly, or in another Big Bang? No one knew. But some portents started happening as December matured.

A woman slept while a tornado ripped off her home’s roof.

More than 100 UFOs are seen along the India-China border.

A contestant on The Bachelor claims the producers brainwashed her.

And on December 9, 2012 (or thereabouts), Gail Simone is told her services as the writer of Batgirl are no longer required… via fucking e-mail!!!!!

Although I did once work at a hospital where the Director of Anesthesiology fired one of his staff via FedEx, and although Editor Mike Gold tells me that this is simply the snafu way that corporations use to rid themselves of the suddenly tainted, I personally think this is an unbelievably putrid, cowardly and totally unprofessional way to be axed, corporate or otherwise.

Gail Simone displays superb class; only tweeting I am very proud of what we accomplished with Batgirl and it was an honor to get to write Barbara Gordon again. Love that dame, as well as a longer post at her blog Ape In A Cape in which she thanks Scott Snyder, Bobbie Chase, Brian Smith, others at DC, and her fans for supporting her.

And the shit, in Newell’s unclassy words, hits the fan.

The comics world, not waiting for December 21st,explodes!

Twitter accounts overload. E-mail boxes are stuffed. Phones ring off the work. Websites, (ComicMix, BleedingCool, Wired, The League of Women Bloggers, The Beat) are “hot off the presses” with the news. Fan forums are abuzz.

What happens in the Bat-offices will most likely remain between Gail and DC, although there will sure to be many rumors spread by many pundits. Fan outcry? Pushback from other pros? Some even speculate that it was a massive marketing ploy…

According to some expert on the Mayans and their calendar, the date did not signify the end of the physical world, but simply the death of one cycle and the beginning of another.

And for one extremely talented and deserving woman, it sure was!

Maybe those Mayans were on to something. Congratulations, Gail!

But don’t breath easy yet, girlfriend. According to the Huffington Post, German scientist and Mayan calendar researcher Nikolai Grube says the 13th Baktun (or cycle) may not actually be over until December 24, 2012.

TUESDAY MORNING (assuming there is one): Emily S. Whitten

TUESDAY AFTERNOON (assuming there is one): Michael Davis