This past week in comics wasn’t anything too special, with DC essentially laying an egg. Luckily a handful of independents rose to the occasion, and Marvel had some strong offerings, including a big surprise for best of the week. On that note… 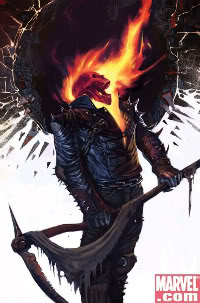 — Any time a comic is so good I have to read it three times before I can move onto the next book, it’s a lock for the top spot. This is darn close to a perfect issue from the first page, which starts off brilliantly ("I’ll never forget the first time I saw a dead body").

Jason Aaron continues the story of Johnny Blaze searching for answers from the angel who turned him into Ghost Rider, a quest that has led him onto a highway filled with evil, cannibalistic demons. It’s an epic fight, overloaded with crazy elements in the way of Quentin Tarantino (yet less self-obsessed).

In addition to the demons, there are evil gun-toting nurses on motorcycles and a still-living cannibal slowly feasting on a deputy. Aaron slowly pulls all of these elements together, leaving off just as they’re all about to literally collide. Oh, and did I mention it also has the line of the week? "The day I can’t catch a dead horse… is the day I give up and rot."

Lastly, I have to give a ton of credit to Roland Boschi for his art. It’s kinetic and loose in the way of Leinil Yu, though not as busy. Combined with Dan Brown’s colors, it makes for some of the best superhero art on the rack.

— I promise this high ranking isn’t just to placate the great Peter David, who took serious umbrage with my review of She-Hulk

#27. No, the latest issue of X-Factor (like most of the run) is worthy of serious praise on its own merits. Arcade’s plans for destroying the team, and all of Mutant Town, play out with expected brilliant insanity, and the weakened X-Factor can barely keep their heads above water (or remaining on their shoulders).

In the previous run of this series, one thing David did exceptionally well was crafting great stories without ever bringing in stock villains. Here, he brings in a stock villain but does it in keeping with the series’ tone. Beyond that, the last page is one of the best I’ve ever seen, with an emotional stomach punch that humanizes one of the Purifiers and a true "Hey, May!" cliffhanger.

Fear Agent #20 — The best of a good crop of small-press titles. I’ve always heard this series praised for its goofy sci-fi plots and fun elements, but this issue is one long emotional swan dive that’s surprisingly touching. Rick Remender intertwines his characters’ harsh pasts with their bleak futures to explain their confused ambitions. A very small story in the grand scheme of things, but a very well done one at that.

— After last issue’s grandiosity (and big reveal), this one scales back the excitement, allowing Steve Rogers’ old friends to come to grips with Bucky carrying the shield. The Red Skull’s plans take another step forward (though it comes a bit too easily), and we learn more about the frozen man. He isn’t Steve Rogers, and he isn’t a Skrull, so who the heck is he?

The Brave and the Bold #12 — The end of Mark Waid’s run and conclusion of the Book of Fate storyline is DC’s best of the week, though that doesn’t say a whole lot. Big and wild as usual for this book, with the heroes taking the fight to Megistus and his secret base inside the sun. Things are so confused, though, that the conclusion ends up too opaque. There’s a nice reveal, though, when Megistus declares he wasn’t trying to destroy the world. He was trying to prepare it "for the crisis where everything changes." 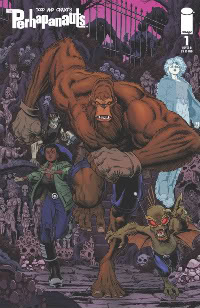 Perhapanauts #1 — The supernatural stew returns, and it’s as fun and weird as ever. Mothmen are on the rampage, offering quite serious portents. And you know mothmen don’t fool around. What I really enjoy about this series is how it’s essentially a big jumble of urban legends, yet its world and characters are very real. That’s a tough trick to pull off, but Perhapanauts does it well.

— Epic, outer-space stories with truckloads of characters don’t always work in comic book form, but this one captures that grandiose vibe. It’s essentially a dog (or raccoon) fight against Ultron as all the heroes band together. Too bad it falls flat in the end, with the (really) big bad guy falling too easily.

Superman #675 — Another huge fight book with big pretensions that ultimately comes down to who hits who the hardest. Combine that with stiff art and a bizarrely large font for captions and you’ve got a book that isn’t worth $3.99.

— It’s always interesting to see works of prose adapted into comics form, so if you’d like to read the Robert E. Howard story that inspired this book, go right here. Despite a slow start, the comic version builds to some intense final pages. So it’s mostly table dressing, but worth the price of admission for Nathan Fox’s unsettling art.

Robin #173 — New writer Chuck Dixon offers up a monumentously forgettable story, with money counterfeiters as villains. The only point of interest is a scene of a guy who looks very much like Dan DiDio getting beaned with baseballs.

Captain Marvel #5 — Your Skrull fix of the week, as we finally learn what the deal is with the new Captain Marvel. I won’t reveal it here, but it’s a convincing explanation that involves no walls of reality being punched. It also sets Marvel up as a compelling character for the first time in a long time. Expect to see him play a big role in Secret Invasion.

— A fun but superfluous story of a forgotten bout between Marvel’s top metal-clad men. I was almost sold on it until Mephisto showed up as the big villain of the story. After One More Day, it’s safe to say I can’t take seriously any story featuring Mephisto.