PRO SE GIVES YOU THE ADVENTURES OF NICHOLAS SAINT THIS HOLIDAY SEASON-FOR FREE!

Pro Se Productions, a leading Publisher of New Pulp and Heroic Fiction, announces the release of a FREE online novella featuring a character that debuted from Pro Se in December 2011.

The Adventures of Nicholas Saint, created and written by Tommy Hancock, first appeared as a novella preview in Pro Se Presents #5 (December 2011).  This story takes the legend of Santa Claus and puts a decidedly Pulpy twist on the entire concept.   A long lived pioneer of many disciplines, most notably genetic science, Nicholas Saint protects the world from his outpost hidden on top of the globe.  Known as Santa Claus to generations- how this came about is as yet an untold story, but one Hancock insists will be shared-Saint uses that identity to not only spread charity once a year, but to defend the world from mad scientists, strange villains, eager despots and most notably, the most evil malevolence in the world, one that children all over the world know and adore.

“There are,” Hancock states, “many a riff on Santa and his elves, Mrs. Claus, and so on.   I’ve always wondered, though, what Santa would look like if he were Pulped up and, as much as possible with such a story, he and his were brought into a more realistic setting-as realistic as the world of Hero Pulps can get and still preserve the essence of the legend, anyway.  Everything that we know to be Santa-and even things that we have forgotten that relate to the legend-are built into Nicholas Saint.  The chance to play, also, with another legendary pantheon of sorts- the bad guys of the tale- is a hoot, too.  I think Pulp fans will find much they like within ‘The Adventures of Nicholas Saint’ and we at Pro Se are more than glad to share it with them.”

The debut novella finds Saint and his companions drawn to a small Ohio town, one that ten years earlier was the scene of tragedy and Saint’s greatest personal failure.  Now, seemingly with a second chance, Saint returns to put right what was made wrong before, only to learn that horror and evil he thought vanquished may likely be alive and well and thirsty for his blood.

Featuring the cover of Pro Se Presents #5 designed and created by Sean E. Ali, Pro Se Productions gives you- THE ADVENTURES OF NICHOLAS SAINT at www.pulpmachine.blogspot.com! 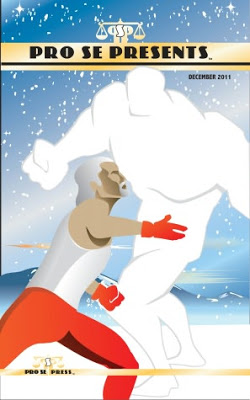