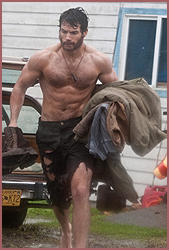 No doubt those of you who troll the Internets or saw The Hobbit were privy to the new trailer for Zack Snyder’s Man Of Steel. My Facebook feed was deluged with tons of praise, mirth, and, most scary to me… hope. Maybe it’s being in the company (and five-a-day e-mail chains) of Mike Gold, but color me doubtful. Not that Mike isn’t anything short of a ray of sunshine mind you… but I digress; I’m none-to-impressed with the footage. That is to say, I didn’t see anything that makes me less uneasy about the future of the DCU on film.

Before I get into the nitty gritty, let me first state: the trailer looks good. Great even. There’s a metric ton of things to like about it. Much like it’s Darker-Knightier cousin, the film embraces a realism that the House of Mouse is way to scared (or smart, maybe… more on that later…) to attempt. The cast is absolutely top notch. Kevin Costner’s Pa Kent is one part Field of Dreams and zero part Water World. Amy Adams is both easy on the eyes and known to be more than being easy on the eyes. And supporting cast like Christopher Meloni, Russell Crowe, Diane Lane, and Laurence Fishburne? Well, it’s not a surprise that the hype machine is already on overdrive here. And what we do see when the tights are put on? A CG’ed Big Blue that feels weighty, and dare I say… awe-inspiring. Even if the suit looks like it’s been run roughshod through the ‘Texturizer’ filter in Photoshop.

The key though, to me, is the tone and direction of the film. I’m not saying Warner Bros. shouldn’t be trying to replicate the success of the Nolan-verse. What I am saying though is that it takes the one thing about Superman above all else, optimism, and smashes it to oblivion. From the waning palette Snyder and his cinematographer employ, to the numerous long-shots of angst, sadness, and emoting… it certainly feels like this film will take every last second of its running time to get us to a place of joy. And while I trust Nolan as a producer, and Goyer and Nolan to write the film wonderfully, I can’t help but be tepid to declare anything but skepticism until I see it. Not because I want to be an internet troll, hell-bent on hate. But because I’ve been burned before by the Brothers Warner. Fool me once, shame on me.

Imagine my glee when DC decided to launch big-budget-dollars into a GL picture. They snagged a director who handled action before. They landed a star who could fight Chris Evans for funniest-but-could-be-serious-and-is-good-looking-in-spandex with Ryan Reynolds. It was lauded by Geoff Johns as being everything he’d hoped for. And we went to the multiplex, oath memorized. And we left the multiplex, trying forever to forget it. While there will be debate amongst people which of the Marvel-Avengers-Verse was imperfect (perhaps the Hulk movie, or maybe Thor?)… Green Lantern couldn’t even lick the dirt of the bottom of Mickey’s yellow bootie in comparison. And this was supposed to be the first DC film to rival Marvel.

Let’s do the math. Let’s envision the best possible scenario from Man Of Steel. Say it’s everything we wanted and more. The story, in spite of any cues in the trailer, is full of joy, and more important… action. Good looking action. Empowered by a top notch script akin to The Dark Knight; heady, but satisfying. And better yet? It’s a box-office smash!

This is where my real fear lay. Because, I truly want this film to succeed. I love DC in spite all the venom I’ve spit at it lately. If Man Of Steel is a rousing success, there’s no doubt in my mind that WB will dictate that the eventual Justice League movie will now need to match the Nolan-verse. And for those keeping score, a gazillion sites have posted rumors that Joseph Gordon-Leavitt will play Batman in that film. Movie-goers may be able to buy that Spider-Man and The Hulk can be rebooted every 3-4 years. But would they believe JGL as Bruce Wayne when the last time we saw him he was Robin-Cum-Batman? And if his newly-gifted Batsuit makes him the man behind the cowl, WB is essentially resting the weight of the world on Christopher Nolan’s shoulders. And who here could say that a movie with 7 super-heroes could still feel weighty and realistic? It may by the straw that breaks Nolan’s back (and interest). And then, the helm will be passed to someone (anyone) who wants to not make their version of the Justice League… but the Nolan-version so dictated by Brother Eye. You dig?

And what of the tone and realism? In a Batman movie, playing things close to reality isn’t so much a stretch. Batman is, for the most part, as believable as one would get when it comes to super-heroics. But Superman? Well, that’s the polar opposite. No matter how much super-science you throw at it, it’s still a guy defying every law, be it biological, chemical, or physical… in order to preserve the peace. By his very nature, Superman is the anti-thesis to the real world. And look if you will, to the competition. Marvel presented the world with Iron Man, Captain America, The Incredible Hulk, and Thor. Each of these movies balances the surreal with the real, and when it came time for the big team up?

We got golden gliding mindless aliens to smash for the better part of an hour. And we ate it up to the tune of a billion or so dollars. Marvel aimed and fired into the heart of the 13+ demographic, and hit the bulls-eye a hundred times over. Batman Begins / The Dark Knight / The Dark Knight Rises did brilliantly too, of course, but as I’ve certainly argued… it wasn’t hard to do it. And let us all be honest again. Rises was good, but not great. Man Of Steel in its 150 second trailer, contained more angst in it per frame than every Marvel movie in the last decade combined. Will it be too much for the movie going public to spend 59 minutes in perplexed sorrow for the final action sequence when Kal-El excepts his destiny and power-punches Zod to oblivion? More importantly… how will we react to it, when the dust settles… and no one asks to get a schwarma?

It’s all speculation, I know. But I couldn’t help myself. When the social media boards light up with praise and joy, I second guess it. Man Of Steel has the potential to do the impossible. But I won’t believe the miracle until I see it with my own eyes. Up, up, and away.