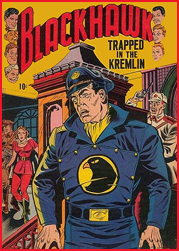 We used to be the bastard child of our American culture.

We were embarrassed by our public image. As we aged, we demanded our pastime mature along with us. We started to infiltrate the means of production, bringing our all-important ideas and ideals along with us. After all, the comics field skipped a generation – few could enter a business that, in the 1950s, was rapidly shrinking. Besides, the Reader’s Digest and the Saturday Evening Post were painting comic book writers and artists as child pornographers. Better to write for the torrid magazines where buff, all-American manly men were saving all-American buxom brunettes from Uncle Joe Stalin and his legion of rodent-faced S & M fanatics, leaving the comics door open for those starry-eyed youngsters who knew no better.

Nature abhors a vacuum, and publishers facing diminished profits understood that our generation worked for a lot less money than the cranky old geezers who wanted to unionize. This same generation was also entering the rest of the public media. Together, we took pleasure in the modern media adaptations of our favorite characters because at least they took our childhoods seriously.

Then we got legitimate. It’s all Richard Donner’s fault. He made Superman – The Movie, the first massive attempt to portray the American comics medium as a serious, legitimate part of our cultural heritage. It was as successful as it was straight-forward, well-produced, well-acted, and well-written. Heroic fantasy took hold of a greater percentage our culture and hasn’t let go.

Comics were taken seriously. The stuff was taught in colleges and in art schools. A decade later Batman came out, upping the ante all the more. Then the Spider-Man movies, the X-Men, the Avengers Universe… Our pastime was generating more revenue in theaters and on television in two years than it had on the newsstands in the previous fifty combined.

And then the people who owned the movie studios that always offered style over substance – style über alles – began to understand there was money to be made in them thar hills. Talent was discounted as necessarily expensive bait. Warner Bros. realized they actually owned a major comic book company, a fact that was purposely kept mostly hidden from them for decades by that very comic book company. Disney understood that the House of Mouse lacked a relevance to the 21st Century audience and their subsequent creations, as popular as they were, weren’t the cultural icons that were found at the House of Ideas. So the Mouse bought them.

And now, more than ever, its employees are being treated as cogs in these massive corporate machines. They need to be oiled and dusted and maintained for a while, but you can replace any or all of the cogs without damaging the icons, without diminishing the shine on the family jewels.

And so we grieve and we fret each time another massively talented creator gets replaced. But that’s how it works in the legit world.

Always did, always will.

The moral of the story: don’t quit your day job.