THREE AGAINST THE STARS 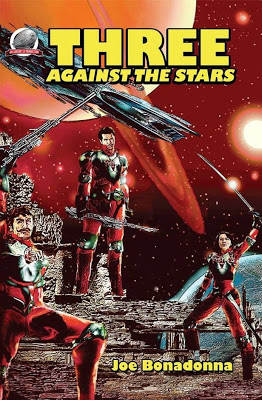 Airship 27 Productions is thrilled to announce the release of its 15th title of the year, a rousing new space opera; THREE AGAINST THE STARS by Chicago based writer Joe Bonadonna. Best known for his sword and sorcery fantasies, Bonadonna now steps into a whole new arena to deliver a truly fast paced futurist pulp adventure.

On the distant alien planet of Rhajnara a conspiracy created by the facist Khandra Regime is set into motion to overthrow the rightful Rhajni Republic and instigate a policy of ethnic-cleansing. The conspirators are cunning and it seems nothing in the universe can derail their mad apocalyptic scheme.

Nothing that is but three rambunctious Space Marines from the Third Regiment Company E of the United States Space Marines assigned to Rhajnara with the Terran Expeditionary Force. Sergeants Fernado Cortez, Seamus O’Hara and Claudia Akira are the most unlikely trio ever to don jarhead camouflage and become military heroes. To their superiors they are wild, reckless and incessant troublemakers always in the thick of things. Yet their courage, loyalty and devotion to duty prove them to be the toughest Devil Dogs in the Corp.

Now, with the aid of a Medical Corpsman named Makki Doon, a young Felisian native proto-feline humanoid, these three futuristic musketeers are about to become the one factor capable of exposing the traitorous Khandra coup. But to do so they will have to put their lives on the line one more time and risk all to save the day facing off against incredible odds. To save an empire they will truly become…THREE AGAINST THE STARS.

“This is old school space opera,” cheered Airship 27 Productions’ Managing Editor, Ron Fortier. “From Buck Rogers to the Space Patrol, the classic elements in this book make for a fun read from start to finish.” The book features interior illustrations by the popular Pedro Cruz with a dynamic cover by Laura Givens and is designed by Art Director, Rob Davis. “In the end, Joe Bonadonna delivers an action packed space opera fans of Edmond Hamilton and E.E. “Doc” Smith will not soon forget.”

In another week at Amazon & Kindle.
In two weeks from (www.IndyPlanet.com)