HANCOCK TIPS HIS HAT TO THE BEST NEW PULP NOVEL EVER! 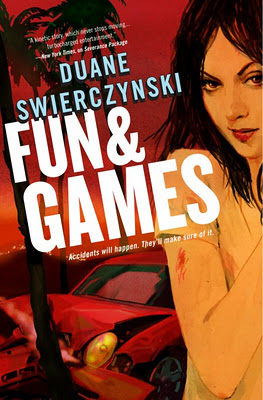 The debate is settled.  The argument is over.   The conundrum has been solved.

There can be New Pulp that satisfies all sides of the ‘Classic Feel versus Modern Relevance’ discussion that some of us have been involved with for a tentful of Sundays.  Yes, the perfect expression of New Pulp does exist in between two covers, Virginia.

Duane Swierczynski, noted author and comic scribe, released “the first of three explosive Pulp thrillers” this past June under the title FUN & GAMES.  And I’ll tell you, it’s definitely both.   Swierczynski hits all the points that Pulp has to hit to be Pulp.  Even with that, though, he presents us not with a perfect hero, but one replete with flaws, weaknesses, and scars.   Charlie Hardie’s inherent goodness, however, is the perfect part of him, the piece that even when he himself doubts it, does not crumble and break away.  This gives him the steel and nerve he needs to be the perfect Pulp hero.

Hardie, as he’s introduced, is a Housesitter on his way to sit the house of a major player in the movie business.   A few years prior, he’d been a ‘consultant’ of sorts for the Philadelphia Police Department and used various skills to help his best friend end some of the crime and corruption in the city.   Tragically, Charlie’s best friend and family are killed when Charlie is basically set up to birddog them for the bad guys.  Nearly killed himself (he earns the nickname Unkillable Chuck because it seems like he’s almost impossible to kill.  He earns that nickname time and again in this book), Charlie makes sure his own wife and child are protected and dives headfirst into a bottle and the life of a housesitting gypsy, which is how he ends up in LA in FUN & GAMES.

The book opens with a B movie actress with quite a history of wild times and drug use racing in her car around the twisted back roads of LA, another car in hot pursuit.   She’s sure they are trying to kill her, but it simply might be coincidence.  Until she’s rear ended and someone approaches her and sticks a syringe in her arm.  She stumbles off the road and out of sight.

Hardie gets to his current assignment, has issues getting in as the key left for him is gone, and is stabbed almost immediately in the chest by a mike stand being projected at him from a somewhat high, beaten up, dirty but beautiful lady hiding in the house.  As she rambles about a group of people trying to kill her and make it look like an accident and how she barely escaped after they rear ended her and drugged her with something, Hardie has to decide rather quickly how to handle all of this.  Why?  Because the people who are trying to kill the actress are already outside the house and determined to get in.

Much of FUN & GAMES takes place IN the house.   It feels very much like a compact version of Die Hard as Hardie and his new charge fight with each other, then the baddies just to stay alive.  Once the action moves beyond the domicile, it amps up even more.  The pacing of this book is frenetic, but well focused and controlled.  Swierczynski knows each and every character inside and out and this allows him to inject them into this breakneck, high octane ride that he’s concocted around one of the coolest concepts I’ve seen in fiction lately.

That concept?  The bad guys.  Good Pulp needs Great Villains and Swierczynski gives Hardie the best.  An organization nicknamed ‘the Accident People’ by the actress they’re pursuing is actually a well peopled, extremely connected group that essentially deals with people, especially celebrities, when they become a problem for someone with enough funds to pay the Accident People.   Overdoses, suicides, car accidents, all the tragic things that befall people in the limelight are basically due to the manipulations and machinations of the Accident People.  Filled with mostly directors, actors, and others from the film industry, this group approaches each job like a movie, insuring the narrative goes the destructive way they want it to.  At every turn, Hardie finds victory only to get handed more defeat by the director of the narrative he fell into, a lady by the name of Mann.  The Accident People are clearly a great template for what Pulp Villains should be.

Equally, Hardie is a perfect example of a New Pulp Hero.  An angel by no means, Hardie wars with himself as much as he does the villains after him.  He’s definitely in a pit of despair and destruction and doesn’t really climb out of it before the book ends.  But he is clearly heroic.  He will not admit he’s an expert in anything, but he does have what he refers to as his ‘lizard brain’, something that he relies on when he simply cannot easily get out of a situation.   This innate primal instinct turns Charlie into a juggernaut of terror against any who stand in his way.

FUN & GAMES simply is the best example of New Pulp at its best I have ever read.  The beginning of the book will jar you, the ending will blow you away…and force you to go out and get the second one.

FIVE OUT OF FIVE TIPS OF THE HAT-Oh yeah.