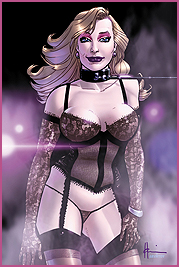 Feminist fan-girls have long lamented the unreal, impossible physiques presented in modern comics. The long-legged, slim-hipped, big-breasted figures, women with heads bigger than their waists, are enraging to all human who possess legs, hips, breasts, heads and waists.

It’s not new, and it’s not a concern limited to graphic storytelling. The fashion industry, for example, delights in sending pre-pubescent girls on the runway, as an ideal to which real, adult women should aspire, because that’s what moves the merchandise. And the accompanying insecurity sells make-up, hair color, plastic surgery and diet pills.

Everybody wins – except real, adult (and adolescent) women. Many of whom develop crippling self-loathiing which sometimes leads to unnecessary surgery, eating disorders, and death.

And now, according to The New York Times, it seems that boys are at risk for the same thing. Unreal expectations about how they should look cause them to take up exercise regimens inappropriate to their still-developing bodies, and to eat a diet that will put their body-fat at dangerously low levels. Some take dangerous steroids

Should we blame comics?

Well, no, not entirely. But comics don’t help.

When I was a young fan-girl, the comics I read didn’t seem unreasonable to me. I mean, sure, characters were flying through airless space, or traveling through time, and some of them were green or orange, but they didn’t seem out of proportion to me. Supergirl was trim and fit, not stacked. Superboy had muscles, but his build was slimmer than Superman’s.

These days, not so much. When DC introduced Tim Drake as the new Robin in 1990, we built a costume and had to find an adult model. There were practical reasons for this (an adult fit-model wouldn’t outgrow the costume), but DC also wanted someone with a muscular build. They wanted someone with muscles to represent a high school student.

And now, Damien Wayne is Robin. He’s supposed to be 10 years old. And, while the artists generally draw him short and slight, his pecs and thigh muscles suggest he’s already juicing.

In my experience, all these insecurities we have about our appearance have relatively little to do as far as the sexual opportunities of our choice. I’ve been fat, and I’ve been skinny, and it made no difference in the quantity nor quality of men who hit on me. I’m willing to bet that the bulked-up muscle man is not the physical ideal of most heterosexual women (and, probably, not a majority of gay men).

And when the ideals can’t exist in real life, but only be drawn on paper (or rendered on a computer screen), we are doomed to failure.

The only sane response is to refuse to accept these ideals, and refrain from supporting them financially. So far, I can live without fashion magazines. Can I live without comics? Can you?