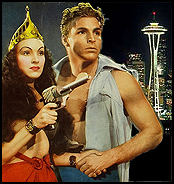 …wind down through the labyrinthine passage to the farthest depth of the cavern and there find a wire, and from the wire will come a spark, and from the spark a flame and from the flame a light that will illuminate the truth…

Well, sometime, maybe. But not today. Today is for blobbing – or, if you prefer a slightly classier and more contemporary work that I learned just this afternoon, chillaxing. Yesterday was the ordeal of being pulled for hours through a tube that’s a teeny bit narrower than I am while breathing sulfur or, as some would call it, airline travel.

I’ve been doing it pretty regularly for almost half-a-century and so you’d think I’d be used to it by now. Okay, I’m resigned to it, but that’s not exactly the same as being used to it.

The occasion, this brisk and, in some areas, snowy March, was a visit to a comics convention in a city I have fond memories of, Seattle. Now, some of you who are my age and have retained the ability to read and thus are reading this, may recall the early fanzines: generally produced on mimeograph machines on cheapish paper; these were not slick and often not very professional, but they had the charm of work done for the love of it, with no hope of gain other than the satisfaction of indulging in a cherished hobby. These publications often featured “convention reports,” accounts of visits to science fiction or comic book gatherings, written by the zine’s publisher or one of that person’s friends. About those conventions: some fans, a professional or two, maybe a movie, maybe – a real treat! – a reel of outtakes from film or television. And maybe…even the appearance of an actor from film or tv. (The first con I attended featured Buster Crabbe.)

Them days is gone forever, Clem. Any convention report would have to be quite lengthy to do justice to its subject. There were, give or take, 75,000 attendees in Seattle and a whole roster of show biz celebrities topped by Patrick Stewart or, as those of you adverse to reading credits might know him, Jean Luc Picard, captain of the starship Enterprise. This mammoth gathering is not the biggest convention – the ones held in New York City and San Diego are bigger – but its still pretty awesome and, I was told, has doubled in size since last year, so…watch your backs, New York and San Diego!

What can I bitch about? Not much. The accommodations bordered on luxurious and everyone we encountered – I’m talking everyone – was friendly and courteous.

What did I like? Well, let’s skip the women – hordes of lovely human beings in costumes, many with interesting tattoos and didn’t my dirty old man merit badge almost burn a hole through my vest! Let’s skip them and remark on how the idea of a convocation devoted to good ol’ comic books didn’t seem to be lost among all the show biz glitter and bling.

Yeah, I’d go back, even if I had to be pulled through a tube while breathing sulfur.