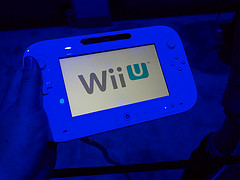 The [[[Wii U]]] was released on November 18 to a gleefully waiting public with midnight release events and the requisite pomp and circumstance.  The system offers a big jump in power and screen resolution, the first system from Nintendo that’s HDMI-compatible.  Add to that a good raft of first and third-party games available, a new layer of social media interaction and a strong (albeit coming-soon) set of media streaming functions, and you get a solid system designed for the family and the hardcore player in mind.

The system is not without faults, tho. It’s slow. Painfully slow.  It required a system update before any games could be played (taking almost 90 minutes to download, exacerbated by the demand on Nintendo’s systems from EVERYONE needing it), as well as a separate update for each and every game before they started up, averaging five minutes each to download and install.

Once the games load, however, they are gorgeous.  The new addition to the Mario Bros franchise draws from a number of chapters of the series, including many from the latest 3DS edition, and adds on many more.  The showpiece game, [[[Nintendo Land]]], (included with the Deluxe Set, available separately for Basic Set purchasers) is a series of “mini-games”, but in name only.  Each is an engrossing and deep game featuring franchise titles like Metroid and Pikmin, games not yet featured in stand-alone games on the system, but do a good job of keeping them in the public’s mind.  The new GamePad works well with the new games, as well as being able to function as a TV remote, allowing you to power up everything at once to use the system.  Many games can be played entirely on the GamePad, allowing the TV to be used by the rest of the family.  It lacks any local storage to allow you to play games independent of the main unit, but that’s more wishful thinking than a real issue.

The system is backwards-compatible with the Wii, but this too is very slow.  It runs through a software-based emulator that provides a bare-bones Wii menu and interface.  Gone is the ability  to send email to other Wii systems, as well as the ability to import Miis, the system’s personal avatars.  You have the option to transfer your Wii’s system data to the new Wii U, but it’s an all-or-nothing option; there’s no way to pick and choose what game saves, Miis or other system data, and once it’s transferred, your old Wii is returned to Factory specs.   Fine if you’re  planning on tossing it in the closet, or on ebay, but if you were hoping to keep it as a second system, you’re somewhat out of luck.

Each game has its own bulletin board in the MiiVerse, part of the social media platform the Nintendo Network, where you can both write and draw notes about the games, share game tips and if possible, get a few laughs.  At the moment, there’s no way to choose what game boards to see,  or to sort the so the games you own and play, making accessing your preferred boards a bit cumbersome.  And of course, getting to the MiiVerse is…slow.

Coming in the next month are the various streaming media channels like Amazon Video and Hulu Plus, joining Netflix which is already up and running.  The Gamepad will also be the center of a service known as TVii, the details on which are a bit sketchy; details will be forthcoming as the service is unveiled in December.

There’s clearly room for improvement in the system, but what’s available now is well worth the expense, and  if you’ve not already gotten a Wii U, the wait.