Fortier takes on CONAN THE BARBARIAN and Survives!!! 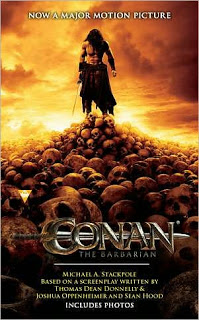 It appears you just can’t keep a good barbarian down.  Conan the Barbarian is a hero and well known iconic figure in American fantasy. He was created by writer Robert E.Howard in 1932 via a series of fantasy stories sold to Weird Tales Magazine.  Howard was born and raised in Texas and spent most of his life in the town of Cross Plains.  As a boy he dreamed of becoming a writer of adventure fiction but was not successful until the age of twenty-three.
Howard’s Conan is a character whose literary imprint has been compared to such fiction greats as Tarzan, Count Dracula, Sherlock Holmes and James Bond.  With Conan, Howard created the genre known as sword and sorcery, inspiring a legion of imitators and giving him an influence in the fantasy field rivaled only by J.R.R. Tolkein.  On the eve of publishing his first novel, he committed suicide at the age of thirty. That he remains a highly read author, with his best works continuously reprinted speaks volumes for his place in the ranks of American masters.
As for Conan, he has appeared in hundreds of licensed paperbacks, Marvel comics, films, television programs, video games, roleplaying games, and even a board game.  In 1982 he came to big screen portrayed by bodybuilding champion turned actor, Arnold Schwarzenegger who recreated the role in the sequel several years later.  Producer John Milius had planned a trilogy, but the proposed third film, Conan the Conqueror was never produced.  Now, almost three decades later, the famous Cimmerian warrior from the mythological Hyborian age once again comes to the silver screen in a brand new production from Millenium Films, Lionsgate, and Paradox Entertainment.  And to promote what they hope will be a huge summer blockbuster, their marketing department commissioned a novelization of the screenplay by Thomas Dean Donnelly, Joshua Oppenheimer and Sean Hood.  The writer given the job was Michael Stackpole.
Many book lovers detest such novelizations believing them to be mere carbon copy retellings form the screenplays with nothing new to offer readers who plan on seeing the movie. In many cases, that is exactly all they get. On the other hand, when such a task is given to a true fan of the material, then what results is something much deeper and more complete than the screen treatment.  Stackpole is a gifted professional who clearly knows Conan and his original exploits as chronicled by Howard.  He not only tells the story laid out by the screenplay, but at the same time enriches it scene upon scene with authentic references to the Conan canon which totally elevates the narrative beyond being a mere reflection of the movie.
Born on a battlefield, young Conan grows up amongst the mountain people of Cimmeria and is taught to be a warrior from the day he can hold and wield a sword.  But as he matures, his father relates how his unique birth is regarded by seers as a powerful portent of the fate that awaits Conan. Not only will he be a great fighter amongst his people, but there are signs that he will one day be known throughout the civilized nations as mighty hero of unrivaled strength and daring.
As always, we have to assume that there will be people picking up this book who have absolutely no idea of who Conan is or Robert E.Howard, but have seen the trailers for the movie and are curious about it. For them, this is as good an introduction to Conan as any other that has come along in the past thirty years.  The book is fun and does its job well; it makes you want to go see the film.  So please, save me the aisle seat.
Share