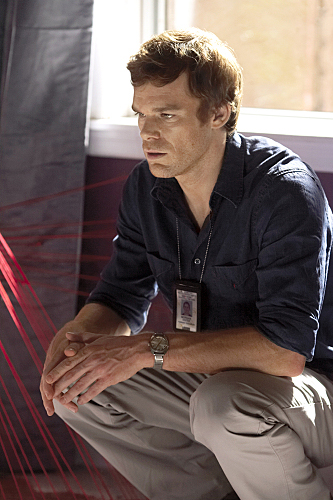 The Crime Scene: “Our Father”
From Showtime: “[[[Dexter]]] begins to question his blind loyalty to his father’s memory. In an act of spontaneity, he wonders whether The Code of Harry is a necessity anymore. Dexter’s relationship with Rita intensifies. Angel becomes Sergeant, replacing the deceased Doakes. Dexter goes to desperate measures to cover up his latest murder, while meeting assistant district attorney Miguel Prado, who has history with Lt. LaGuerta. Meanwhile, the team discover the victim of another killer, which could just be bigger than the Bay Harbor Butcher.”

[[[The Dark Defender]]] is back, and he’s ready to kick ass and take blood samples.

Last season, blood spatter analyst cum vigilante killer Dexter Morgan nearly found himself on the wrong side of a prison cell. Sergeant James Doakes discovered that Dexter was the man behind the grizzly Bay Harbor Butcher slayings. Luckily, Dex was saved by the belle, the highly obsessive Lila, who killed Doakes to prevent Dexter from being discovered. Not so luckily for Lila, Dexter murdered the woman for killing Doakes, but not before pinning the murders on the deceased officer. With that monkey off his back, Dexter was free to resume his vendetta against Miami’s criminal underground… and resume he has!

As the third season begins, Dexter reflects upon his highly successful summer. His game has stepped up in every sense of the word. He’s back in the killing business, taking out all new bad guys and making up for lost samples with a new blood collection. He’s also upped his acting abilitiy, particularly notable when Dexter poses as a junkie to attain recon on his next victim, a murdering drug dealer named Freebo. Dexter’s social skills are at an all time high as well, both around the Miami Metro Police Department and at home with his girlfriend, Rita. In fact, Dexter’s progress as a killer might be second to his relationship progress with Rita. Let’s just say that he’s had his hands very, ah, full. 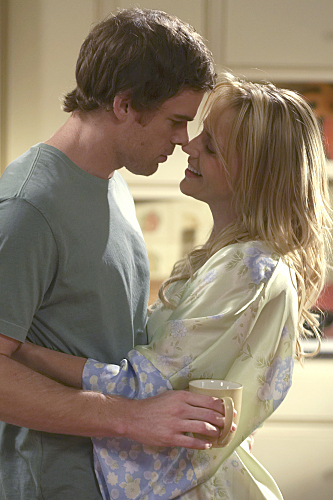 Still, on a show like Dexter, things can’t stay rosy for long before they start turning crimson. When Dexter goes to dispatch the aforementioned Freebo, he unintentionally kills a potentially innocent man Oscar Prado. Oscar is the brother of Miami Assitant D.A. Miguel Prado, the top prosecutor in Florida for three years straight. Miguel, played excellently by Jimmy Smits ([[[NYPD Blue]]], [[[Cane]]]), takes an interest in Dexter when he notices how affected he is by Oscar’s death. Positioned to be this year’s answer to Agent Lundy, Miguel Prado’s relationship with Dexter is certain to be a major focus of the season.

Strangely enough, Dexter is uncommonly at ease with Oscar’s demise. Before, Dexter had never killed a man whose guilt he wasn’t absolutely certain of. Now, the Code of Harry has potentially been compromised. Did Oscar deserve to die, or was he just in the wrong place at the wrong time? Dexter isn’t sure, but knows that in order to continue his lethal mission, his rule book will need to evolve.

Things get even stickier when Rita reveals to Dexter that she’s pregnant with his child. The prospect of a Dexter Junior kicking around in Rita’s belly is enough to send shivers down anybody’s spine, including Dexter’s. Will the apple fall far from the tree — or, more appropriately, the knife from the hand? How will having a child affect Dexter’s “habits” as the season progresses? Our hero’s impending fatherhood is bound to be as strong a focus for season three as the Prado murder.

Despite it’s overall success, there are some weak points in the season premiere. Dexter’s foulmouthed sister Debra, trying desperately to make detective, looks likely to have yet another “troubled boyfriend” story arc in the making. Internal Affairs wants Deb to blow the whistle on new detective Joey Quinn, which she initially refuses but will undoubtedly explore as the season continues. There has to be something else that Deb can do on this show other than being routinely positioned against strange men all the time. Here’s hoping that plot gets ripped to shreds before long. 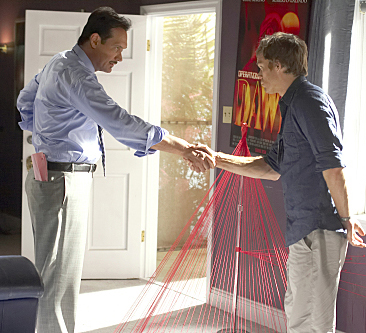 There’s also plenty of cheap dialogue to go around, which isn’t a unique complaint to this episode. Bad puns (“You’ve been working such killer hours lately”) and sappy one-liners (“There’s only one person who can get in your way… you!”) reek badly enough to make any watcher’s nostrils flare up at the cheesiness. A show of Dexter‘s caliber should be above such poor scriptwriting, but it’s admittedly a high class problem when stacked against the show’s finer points.

Perhaps the episode’s central weakness is its inability to define the direction of the season. Both the seasons one and two premieres clearly established their respective overall arcs in clear and compelling ways. This episode failed to do that. Will season three be about Dexter becoming a family man? Will it focus on the death of Oscar Prado and the hunt for Freebo? Or is there something else, perhaps a bit subtler, bubbling under the surface? Either way, the set up for the remaining episodes isn’t quite as strong as it’s been in previous years. Hopefully Dexter will find its footing before long.

Dexter‘s return to the small screen is gloriously gory, but perhaps not up to the usual standard. Still, a subpar episode of Dexter is better than most junk on the boob tube. And, as Rita herself says, this is the calm before the storm… and with this show’s history, the storm is bound to be one mean, ugly mother.

The Next Victim: “Finding Freebo”

From Showtime: “Every cop in Miami is tasked with finding the fugitive Freebo, who is accused of killing the younger brother of Assistant D.A. Miguel Prado; Dexter and Rita move closer to making a big decision about their family.”