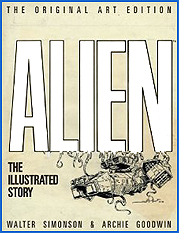 There’s been a lot of high-quality books lately that reprint classic stories straight from the original. My friends at IDW do a lot of those, so they’ll be deeply depressed that I’m not going to be talking about one of theirs. And of course there’s no reason to believe a comp list wouldn’t change my attitude.

Return with us now to those thrilling days of yesteryear; in this case, about two months ago. We’re at the vaunted Baltimore Comic-Con – in specific, the Harvey Awards dinner. Walter Simonson had an advance copy of Titan Books’ hardcover collection of the Alien movie adaptation, as done by Walter and the late and much, much missed Archie Goodwin. This book was the exception that proved my point that doing an absolutely first-rate adaptation of a movie is a near-impossibility.

The needs and treasures of the comic book medium are different from those of the movie medium: we have total control of time and space and we’ve got a special effects budget that is limited only by the collective minds of the producing talent. Movies, on the other hand, have going for them music, motion and the benefit of the shared-experience. Apples and oranges.

The Goodwin-Simonson Alien was one of those rare exceptions; perhaps the best of those exceptions. Either way, it was and is worthy of this new high-quality format.

So when Walter was showing off his advance copy like a proud papa before an audience of some of the most talented people in the artform (Mark Wheatley snuck me in), I thought about doing what every other red-blooded comic book fan would think of doing: cold-cocking the son of a bitch, stealing his book, jumping into my Ford Focus and driving back to Connecticut, laughing hysterically while leaving my daughter to fend for herself.

I maneuvered into position in the darkened room, avoiding Louise Simonson. While I’d take Walter on, I do not have what it takes to take on any person who could be so gifted and so nice after working for James Warren. Then, and only then, did I have an epiphany.

I’ve known Walter for decades and decades. We lived near each other on Manhattan’s Upper West Side, we played on the same volleyball team. We’ve dined hither and yon – he once drew a massive prehistoric landscape on the linen tablecloth at a Skokie Illinois restaurant in order to “illustrate” a point. I respect and admire Walter as one of the nicest human beings on the planet… with the exception of the volleyball courts.

But that’s not why I didn’t cold-cock Walter Simonson. Clearly I’ve gotten old, an aging lion gumming his dinner in the corner of the cage while the younguns are preening themselves for pussy.

No, I didn’t cold-cock him because I remembered I already ordered the book. So stealing his simply wasn’t worth the energy.

But it was worth the wait. Buy it before it sells out.