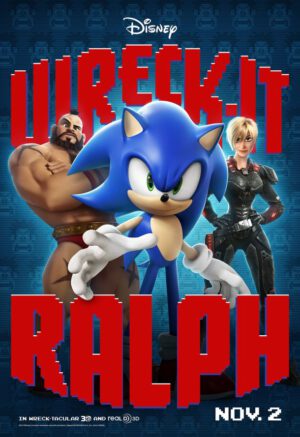 The Kid would never forgive if I used any other poster…

Wreck-It Ralph is very much of a new breed of Disney animation, showing both the freshness of new blood in the company, and a new attention to story with Pixar’s John Lasseter now holding court as the New Walt at the company.  Directed by Rich Moore (The Simpsons) and written by Moore, other Simpsons alum Jim Reardon, the film takes ideas from Toy Story, Who Framed Roger Rabbit, and Saturday Morning cult favorite Reboot.  The world inside videogames is alive; after hours they visit each other, attend parties and if their games were unplugged, roam the halls of Game Central Station begging for spare fruits and power-ups.

Wreck-it Ralph (John C. Reilly) is the antagonist of classic videogame Fix It Felix Jr., the titular hero voiced by Jack McBrayer.  After thirty years of being the bad guy, he examines his life and finds it lacking.  He attends the 30th anniversary party for the game at Felix’s penthouse apartment, and is made clear he is not welcome by the denizens of the apartment house whose job is his to demolish hundreds of times daily.  He attempts to show that he wants to be a good guy, and is told that he is a bad guy, will remain a bad guy, and that he must “go with the program”.  He embarks on a quest to “become a hero”, which he believes will bring him the love (or at least the penthouse apartment) of the people of his game.  He plans to “game jump” into another videogame, where he can take the role of good guy and achieve his dream.  His choice, the new sci-fi shoot-em-up Hero’s Duty, spearheaded by the gruff and buxom Sergeant Calhoun (Jane Lynch).  He makes it to the climax of the game, and earns a “hero” medal, but his ingrained predilection to destroy sends things into a shamble quickly, launching him screaming into the super-sweet cart-racer Sugar Rush, with a cy-bug, one of the baddies from Duty in tow.  He meets Vanellope Von Schweetz (Sarah Silverman), a bit of glitch code from the game who, like Ralph, wants to better herself and prove she can be a hero.  But according to the ruler of the land, King Kandy (Alan Tudyk), there may be a real danger if Vanellope lives out her dream.  And all along, the Cy-Bug from Hero’s Duty is multiplying into peppermint-striped hordes under the taffy swamps and rock-candy mountains.

The film takes a unique take from the first scene – Ralph is clearly portrayed as the bad guy, but not all that bad.  But in addition, like in many of the Farrelly Brothers comedies, he’s given a reasonable motivation for his unpleasantness.  According to the games opening cut scene, he was ejected from his home (a stump in the forest) in order to build the residential edifice at which he daily expresses his dissatisfaction.  The theme of the film is clearly about the upsides and downsides trying to be more than you were literally created to be – Ralph’s desire is honest, but like Vanellope’s, runs the risk of hurting many others.  The ecology of the game world has a bit of an edge as well – the idea of homeless videogame characters gets a laugh, but it’s an uncomfortable laugh for the parents. 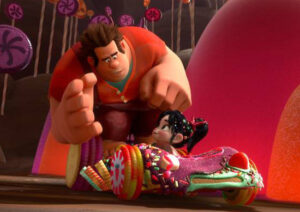 You’ve already heard about the cameos.  Like the aforementioned Roger Rabbit, the film had gained great buzz by arranging cameos from scads of classic videogames and characters, including the combatants from Street Fighter, the cast of Pac-Man, and, The Kid’s personal favorite, Sonic The Hedgehog. Lesser-known games like Burger Time and Tapper make an appearance, the latter being the popular after-hours hang-out of the gaming world.  Like the appearance of actual toys in Toy Story, they give the world a sense of verisimilitude and realism, as well as provide for plugs of lots of classic games. Not to mention a few new ones.  As part of Sonic’s appearance, Ralph will be appearing in Sonic’s new game, Sonic & All-Stars Racing Transformed.  Even the legendary Konami Super-Code appears in the game.  No child of the 80s can sit through those scenes of Dig-Dug diving into the floor of the game station without being gobsmacked by nostalgia.

But in addition to the cameos the Disney creators do a great job of creating games that have the real look and feel of real games from various gaming eras.  Fix-It Felix Jr. is a game in the Donkey Kong / Crazy Climber mold, and and first look, it looks fun enough to want to play for real (and you can, at the film’s website, as well as Hero’s Duty and Sugar Rush). Hero’s Duty is a parody of modern first-person shooters like Halo, and Calhoun is clearly a kissing cousin of “Fem-Shep” from Mass Effect.  Sugar Rush also parodies the recent tactic of product placements in video games, by having actual product placements.  Felix and Calhoun almost meet their end in Nestle Quik-sand, are saved by Laffy Taffy, and while the boiling “diet cola” lake may be generic, the stalactites of Mentos above it are decidedly not.

The quality of the film can be best explained by an error of The Wife’s – when she saw the level of humor and clearly rich plot, she mistakenly assumed it was a Pixar release.  High praise indeed, and praise that Disney has worked hard to obtain.  The last few Disney releases have been quite a step up from a recent period of repetition, and that’s a good thing.