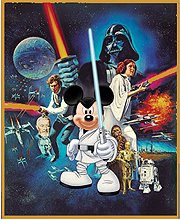 Let’s see – what were the big stories of this past week? Hurricane/Superstorm Sandy slamming the East Coast and turning off power as far away as Lapeer, Michigan. Yup. That’s the big one. President Obama wins re-election. Wait. That’s next week. George Lucas sells his holdings to Disney and Episode VII is announced.

That sounds like the one I’m going to write about.

Caveats: Although I write two Star Wars comics for Dark Horse, I know nothing more than any of you about this. I was as surprised as anyone when the story broke. I hesitated before writing this column for fear that someone might take this as an insider’s view. It’s not. It’s all just rumination and speculation on my part. We good?

There has been, of course, a cacophony of reaction all over the ‘net. Them underground tubes have been humming. Some praise, some wails of distress, some outraged howls of betrayal. Among Star Wars fans there has been a lot of speculation of what Episode VII would be like. Which part of the Extended Universe (EU) would be adapted? The Thrawn Trilogy? The New Jedi Order? Legacy?

The answer: none of the above. Official response has been that it would be “an original story.” Massive disappointment among the EU faithful and fears that the new Episode VII will make hash of the post Episode VI EU. I fully expect the new film to respect EU continuity as much as George Lucas did which was – not at all.

The reason why? If you’re not a EU fan, how many of those possibilities that I named up above made any sense to you? I’m guessing “none of the above.” The fans are important but there’s not enough of them. The first new Star Wars movie in decades? A sequel, not a prequel? Disney and Lucasfilm are going to be looking for Avengers type numbers and that means it has to be accessible to the general public. Heck, they’ll want it to be accessible to those who haven’t watched a Star Wars film ever. That’s not unreasonable. That’s why Disney made the purchase in the first place.

There are also concerns that Disney will “Disneyize” the franchise. That doesn’t make sense to me. Star Wars is very compatible with Disney as is. Also, Disney also owns Pixar and hasn’t messed with that so far as I can see. They own Marvel Comics and Marvel seems to be doing what Marvel does without much change, again so far as I can see.

Not every change is bad. I was one of the doubters when Paramount announced a re-boot of Star Trek. I ended up loving it. I also doubted when Daniel Craig was announced as James Bond. A blonde James Bond? That was just wrong. Now – I think Craig is one of the absolute best Bonds and I can’t wait for Skyfall.

There also has been speculation that the Star Wars comics would move from Dark Horse to Marvel Comics. Here you might think I have some reliable info, but I don’t. Dark Horse has the license at the moment; it was just renewed a few years back. Dark Horse is taking a wait-an-see approach and so am I.

There is history; the Disney Comics were at Boom! before Disney bought Marvel and then they got moved to Marvel Comics. And it would make sense, I suppose, to move the comics to the comic company Disney owns. On the other hand, several of the movie franchises are at studios other than Disney.

As I said, Dark Horse has a license. I have a vested interest to be sure – I have two SW titles out at Dark Horse, Agent of the Empire (the new arc, Hard Targets, has just started and the first arc, Iron Eclipse, has just been released in TPB form) and Dawn of the Jedi (the first arc, Force Storm, will be released on Christmas day, and the new arc, The Prisoner of Bogan, will be released November 28 and, yes, I’m hyping my own product, thank you very much). I’ve worked on Star Wars comics for about ten years. Would that continue if the license moved to Marvel? Beats me.

So is all this a good thing or a bad thing? It’s a thing. George Lucas has been talking about retiring for some time so it makes sense that he found a good home for his creations. He’s still around and I suspect he’ll have as much say as he wants in what happens. Things will change and that includes EU continuity. Does that bother me?

Not really. I don’t own any of the characters that I’ve worked on in the comics any more than I own any characters that I created at Marvel or DC. (I have a financial stake in Amanda Waller and that’s sweet but not ownership.) Fans often evince a feeling of ownership of Star Wars (or Harry Potter or Twilight or any other fan intensive franchise) but that’s not reality.

What we have (and I’m a fan as well) is hope, in this case maybe a new hope, that Episode VII will be everything we want in a Star Wars movie and the stories that come out of it and surround it will also be cool. Why do I hope? Because it’s in Disney’s best interest to do it right.

The galaxy will be watching.

Monday: Did Sandy Get Mindy?