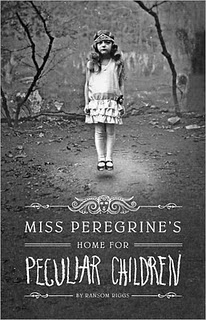 Sometimes words and pictures come together in the same story. There’s more than one way of accomplishing this — comics is the most obvious, with the story told in a sequence of pictures and text (captions and/or dialogue), but there are other options — and books for pre-adults have typically made more use of pictures than those in the more adult portions of the library.

Remember: adults are dull and staid, and must not be upset or disconcerted by mere pictures in their very, very serious books. Children are more mentally flexible, and can handle the shock of the pictorial.

Teens are somewhere in between: they usually want to be adults, but they’re still young enough to question that dull stolidity, and still, sometimes, will gravitate to books with pictures in them. The two books I have in front of me today were published to be read by pre-adults of various ages — though I think the first had an older expected reader-age than the latter — and they’re chock-full of pictures. In fact, both of them are stories told through and about their pictures, in different ways — and, more interestingly from my point of view, neither of these books use the language and techniques of comics. They both use pictures as part of their storytelling, but come at it from different traditions, and don’t tell their stories from image-to-image the way that comics do.

is the more conventional of the two books; it’s a novel by Ransom Riggs (his first), illustrated by a sequence of real, mostly unaltered vintage photographs. (Riggs is clear about the “mostly unaltered” stipulation, since some of these are quite odd photographs, as with the cover shot, showing a hard-faced girl standing rigidly still a foot off the ground.) Those photos are part of the story in the most basic, literal way — every so often, a character talks about looking at a photograph, and then, lo! the actual photo appears on the next page.

In fact, that’s the main problem with Miss Peregrine: it’s a fantasy story about people with strange, unlikely abilities living among us — the “peculiar children” of the title — but the story is slow and plodding for more than its first half, and the reader comes to feel that Riggs assembled the pictures into a sequence first, and then made up a story to fit that sequence. That story chugs along in a low gear for most of the book’s length, ambling slowly from one picture to the next, when the reader would really prefer fewer pictures — or fewer interruptions for “and I have a picture of that as well!”, at least — to get a story that picks up the pace a bit.

That story is told by young Jacob Portman, a quiet and mostly solitary teen in modern-day Florida. His paternal grandfather used to tell him unlikely and amazing stories from his own youth, but stopped when Jacob insisted that those stories were lies. But then Jacob finds his dying grandfather in the woods near their home, and catches a glimpse of a tentacle-mouthed figure that may have killed the old man. Of course everyone insists that Grandpa Portman was killed by a wild animal, but of course Jacob doesn’t believe that.

Jacob spends time with a psychiatrist, Dr. Golan, but still has regular nightmares, no matter how many drugs Golan prescribes. Eventually, he convinces his dreamy father — whose latest, soon-to-be-abandoned project is a book about birding — to take the two of them to the remote Welsh island where Grandpa Portman grew up during WWII, for the one to investigate the waterfowl and the other to find the titular institution, and possibly track down people who knew his grandfather.

There, he finds the orphanage ruined, the victim of a bombing raid on September 3, 1940. Only one person emerged from the wreckage: his grandfather, who set off immediately to fight. But of course it’s not that simple: there are peculiar children, and he finds them, in the place they fled to, or created, that fateful day in 1940. And where there are good mutants, there must be evil ones as well, so the monsters that his grandfather killed — after a long life spent hunting and killing those same monsters, as Jacob learns — are soon found to be hot on  his trail. Eventually, after lots of backstory and vaguely-interesting old pictures, there’s a confrontation, a battle, various choices and dramatic speeches, and an exodus that I expect will lead to a sequel.

The bones of that story could easily be exciting, and Riggs makes many of his scenes exciting — but the overall sense, for most of the book, is of plodding from one photo that isn’t nearly as eerie or evocative as it should be to yet another one. Riggs also has an occasionally tin ear for invented terminology — ymbrynes being the worst offender — and the kind of lack of imagination that’s only startling in retrospect. (It’s been nearly 70 years since the bombing raid, and one must wonder why the peculiar children haven’t changed at all since then — Riggs has in-story reasons for part of the lack of changes, but seventy years of accumulating days, all very much the same, cannot but have an effect on those children.)

Miss Peregrine is one of those fantasies written by an outsider, with an initially intriguing idea that turns out to be the oldest of hats — a cousin of X-Men and Wild Talent and Zenna Henderson — and that has not been thought through, or integrated into the world, quite as thoroughly as the reader might hope. It’s nice enough, but the kind of book that inevitably reminds the experienced reader of a dozen better things. So the ideal reader for Miss Peregrine will have to be someone who is really, really impressed by those old photos. 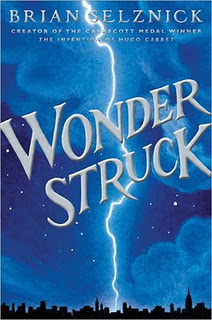 is the second book by Brian Selznick in a format that he, as far as I can tell, invented: a story told in alternating sequences of prose and pencil drawings. The drawings are not comics — they each take up an entire spread or page, and the transitions from one to the next are always cinematic, with an imagined camera clearly moving through space. Unlike The Invention of Hugo Cabret

(which I reviewed here in 2008), the two stories in Wonderstruck are initially separate — but any reader of an experience knows that a book with two separate plotlines must eventually see them intertwine and merge; it’s an iron law of literature.

In the summer of 1977, Ben Wilson is twelve years old, living in Gunflint Lake, Minnesota with his aunt and uncle mere steps from the house he used to live in with his single mother, until her recent accidental death. Fifty years earlier, Rose Kincaid is the same age, living unhappily in her father’s home in Hoboken, dreaming of her run-away movie-star mother. Both of them are deaf — Ben at first just partially. Both of them are unhappy, in the care of family members they don’t like or connect with as much as they should. And both of them dream of other things — those those “other things” are still unformed.

Both of them make their way to the American Museum of Natural History, in New York City, connected by a love for museums and the things they celebrate, by unexpected family ties, and by Selznick’s current enthusiasms. And, for all of Wonderstruck‘s over-600-page bulk, it’s a short, slim story — they both run away, they both find family, they both fall into better lives.

Rose’s story is told in pictures and Ben’s in words, up until the point when they meet — after that point, Wonderstruck has a single narrative thread that bounces back and forth from words to pictures, as Selznick did in Hugo Cabret. Selznick’s pictures are excellent, though his aping of the film camera does become monotonous after a while: comics have developed so many other techniques for transitions between pictures over the past century that it can be annoying to see Selznick ignore all of them in favor of a late-talkies swooping camera. His words are serviceable, though, here and there, they can feel overdone.

Wonderstuck, in the end, has less at stake than Hugo Cabretdid, and that makes it feel smaller — even when Ben is cast adrift in New York, deaf, knowing no one and nearly aimless, he doesn’t seem to be in real danger, and he swiftly finds both a friend and a safe place. It’s a sweet book for middle-grade readers, though, and may be particularly good for reluctant readers — it’s a massive book that even they can charge through in no more than a few hours.