3 Steps To Hell
Rediscovering the Lost Novels
of Arnold Hano 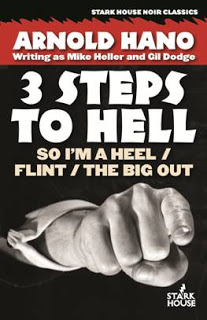 Stark House Press, in the business of reprinting some of the best mysteries and supernatural fiction of the past 100 years, is pleased to announce the publication and launch of 3 STEPS TO HELL, an omnibus of three hard-hitting novels by Arnold Hano.

Many know Arnold’s name as the editor of noirmeister Jim Thompson at Lion books – Hano was the man who guided Thompson during his most productive period.  Others may know Arnold penned A Day in the Bleachers, the seminal book about baseball from a fan’s perspective centered around “The Catch” by Willie Mays in the 1954 World Series. But what few may not be aware of is that Hano, under his own name and several aliases, wrote novels featuring driven, flawed characters.

3 Steps to Hell reprints for the first time three of Arnold’s books.  The Big Out was his first novel and was set, appropriately, in the world of baseball.  The story features major league players, gangsters, bribes and the outlaw teams of Canada.  In So I’m a Heel, a WWII vet, with plastic for a jaw shattered by a sniper’s bullet, seeks to blackmail a rich man over his terrible secret, but the scheme goes way wrong.  And in Flint, a western inspired by Jim Thompson’s Savage Night, a tormented gunslinger takes on one more job to kill for money.
This edition also features an introduction by crime novelist Gary Phillips (The Warlord of Willow Ridge) and a Q & A with Arnold conducted by his longtime friend, playwright Dan Duling.  3 Steps to Hell can be obtained via your local bookstore or direct from Stark House Press —http://www.starkhousepress.com/hano.html
Share