Pro Se Productions, a cutting edge Publisher of Heroic Fiction and New Pulp, introduces a concept that plunges a Team of Adventurers headlong into cataclysmic conflict with classic horror creatures!  They don’t just hunt Monsters… They Destroy Them! They are the MONSTER ACES! 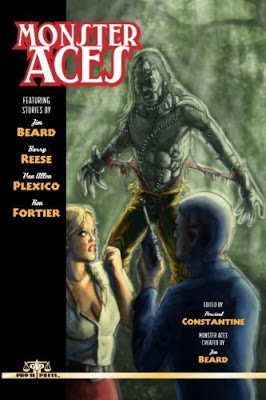 Having selflessly abandoned their identities, their pasts and their futures, the Monster Aces are all that stand between humanity and the fell creatures that lurk in the shadows. Four men and one woman use their amazing abilities as a team to scour the globe for monsters and bring an end to their unholy existence – whatever the danger, whatever the cost. Through five thrilling tales crafted by some of Heroic Fiction’s most engaging authors you will ride alongside the Aces on the trail of monsters both classic and new. No environment is too severe nor too remote for these adventurers to seek their prey and destroy them forever. The team, lead by a mysterious military veteran, uncover evil in mysterious European villages, in dark forests and fetid swamps, in ancient rivers and on the high seas…monsters are everywhere, but so too are the Monster Aces. Concept creator Jim Beard is joined by writers Ron Fortier, Barry Reese, and Van Plexico for a new twist on the classic monster stories of yore, a unique melding of horror and driving pulp action that will thrill and chill you.
Featuring appropriately creepy and stunning cover art by Terry Pavlet and the always exemplary design and logo work of Sean Ali, MONSTER ACES is equal parts action, horror, and mayhem as Man versus Monster in five titanic tales of terror!
MONSTER ACES is available at Pro Se’s Createspace store by clicking HERE!
Get your copy of MONSTER ACES at Amazon by clicking HERE!
Ebook coming SOON!
And join Creator Jim Beard and Contributor Barry Reese at Pro Se’s Promotional Party for MONSTER ACES via Shindig on Saturday, October 27, 2012 from 2 to 3:30 PM at http://www.shindig.com/event/prose2 .  RSVP Today!